Escape from the Deep: A Legendary Submarine and Her Courageous Crew (Hardcover) 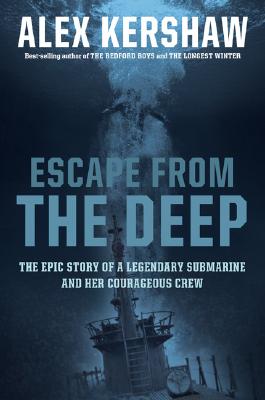 Another winner from Kershaw. An excellent account of a small group of Americans who gracefully rose to the occasion. Memorable. — Bill Lewis

By October, 1944, the U.S. Navy submarine Tang was legendary-she had sunk more enemy ships, rescued more downed airmen, and pulled off more daring surface attacks than any other Allied submarine in the Pacific. And then, on her fifth patrol, tragedy struck-the Tang was hit by one of her own faulty torpedoes. The survivors of the explosion struggled to stay alive in their submerged iron coffin one hundred-eighty feet beneath the surface. While the Japanese dropped deadly depth charges, just nine of the original eighty-man crew survived a harrowing ascent through the escape hatch. But a far greater ordeal was coming. After being picked up by a Japanese patrol vessel, they were sent to a secret Japanese interrogation camp known as the Torture Farm. They were close to death when finally liberated in August, 1945, but they had revealed nothing to the Japanese-not even the greatest secret of World War II.

Alex Kershaw is the author of the widely acclaimed and bestselling books The Bedford Boys, The Longest Winter, and The Few, and two biographies: Jack London and Blood and Champagne: The Life and Times of Robert Capa. He lives in Williamstown, Massachusetts.