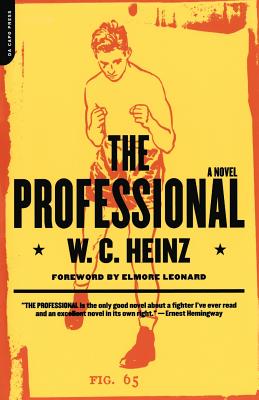 By W.c. Heinz
Call or email to see if a used copy is available.
Out of Print

"The only good novel I've read about a fighter, and an excellent novel in its own right." Ernest Hemingway said that about local legend Heinz's excellent boxing novel. Highly recommended! — Stan Hynds

Originally published in 1958, The Professional is the story of boxer Eddie Brown's quest for the middleweight championship of the world. But it is so much more. W. C. Heinz not only serves up a realistic depiction of the circus-like atmosphere around boxing with its assorted hangers-on, crooked promoters, and jaded journalists, but he gives us two memorable characters in Eddie Brown and in Brown's crusty trainer, Doc Carroll. They are at the heart of this poignant story as they bond together with their eye on the only prize that matters—the middleweight championship. The Professional is W. C. Heinz at the top of his game—the writer who covered the fights better than anyone else of his era, whose lean sentences, rough-and-ready dialogue, dry wit, and you-are-there style helped lay the foundation for the New Journalism of Jimmy Breslin, Gay Talese, and Tom Wolfe. And all the trademark qualities of W. C. Heinz are on ample display in this novel that Pete Hamill described as "one of the five best sports novels ever written."

W. C. Heinz is the coauthor of Run to Daylight, the best-selling autobiography of Vince Lombardi, and MASH, the novel that later became a successful movie and TV series. Da Capo recently published an omnibus collection of his best sportswriting, What a Time It Was. W. C. Heinz lives in Vermont.

Esquire (website), 2/17/12
“It's about fighting, but it's also about watching and listening, and it's about patience, and honing, and craft, and sparseness, and beauty, and crushing, awful defeat.”

Men’s Journal,11 Best Cult Sports Books, 1/18/13
“The author of this book received two congratulatory notes upon its publication in 1958: one from Elmore Leonard and the other from Ernest Hemingway, who called it ‘the only good novel I’ve ever read about a fighter.’…Style-wise, the book owes much to Papa—though it deserves its own championship belt.”