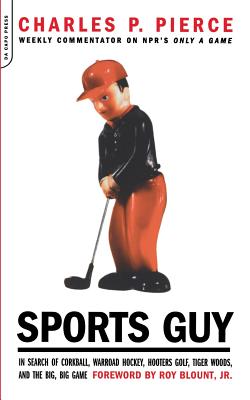 Pierce possesses a humanity that shines through when he writes about the people that play the sports. Whether he's taking the luster off the myth of Tiger Woods or lionizing the guy who holds pole vaulting clinics in his barn, his writing rings true and heartfelt. You should not miss the Sports Guy. — Stan Hynds

Here, at last, is Charles Pierce's best writing on sports, collected for the first time in one volume. All of these pieces, first published in GQ, the National, and Esquire, showcase Pierce's trademark humor. Some are spot-on profiles of famous sports personalities such as Tiger Woods, Magic Johnson, and Peyton Manning, while others are portraits of lesser-known figures such as Nebraska basketball coach Danny Nee, a former Vietnam vet who openly opposed the Gulf War, Cool Papa Bell, a ballplayer from the Negro Leagues who is ripped off by memorabilia hounds, and Mike Donald, an obscure golfer on the PGA tour who played the best golf in his life only to lose a tournament by one stroke. Pierce also takes us on unforgettable journeys into the wide world of sports, from a snake-charming pole-vaulter to life on the Hooters Golf Tour, from the fashion accessories of the modern ballplayer to how a small community -- Warroad, Minnesota -- bonds over ice hockey. Sports Guy will delight Pierce's devoted readers and is certain to win him many, many more.

Charles P. Pierce (together with Roger Angell) has been featured in the Best American Sportswriting annuals more often than any other writer. In addition to Esquire, his work has appeared in many publications, including the New York Times Magazine, GQ, and the Los Angeles Times. He lives in Massachusetts.