The House of Fragile Things: Jewish Art Collectors and the Fall of France (Paperback) 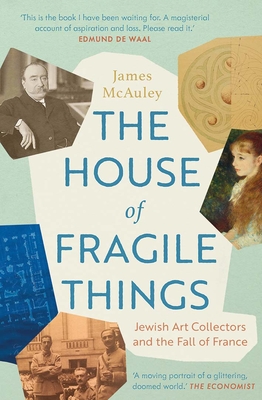 A powerful history of Jewish art collectors in France, and how an embrace of art and beauty was met with hatred and destruction

In the dramatic years between 1870 and the end of World War II, a number of prominent French Jews—pillars of an embattled community—invested their fortunes in France’s cultural artifacts, sacrificed their sons to the country’s army, and were ultimately rewarded by seeing their collections plundered and their families deported to Nazi concentration camps.

In this rich, evocative account, James McAuley explores the central role that art and material culture played in the assimilation and identity of French Jews in thefin de siècle. Weaving together narratives of various figures, some familiar from the works of Marcel Proust and the diaries of Jules and Edmond Goncourt—the Camondos, the Rothschilds, the Ephrussis, the Cahens d’Anvers—McAuley shows how Jewish art collectors contended with a powerful strain of anti-Semitism: they were often accused of “invading” France’s cultural patrimony. The collections these families left behind—many ultimately donated to the French state—were their response, tragic attempts to celebrate a nation that later betrayed them.

James McAuley is the Paris correspondent for the Washington Post and a contributor to the New York Review of Books. He recently received his doctorate in French history at Oxford.

“Engrossing . . . traces the long, vexed relationship of these families with materiality, their faith that they could ‘create something beautiful in an increasingly hostile environment,’ their attempt to control works of art as they could not control life.”—Jackie Wullschläger, Financial Times

“A moving portrait of a glittering, doomed world.”—The Economist

“Ghosts from the pages of Proust and the paintings of Renoir wander through sumptuously appointed salons and galleries, charmed to life by James McAuley in his alluring and disturbing history The House of Fragile Things. . . . The depths of French anti-Semitism is the stunning subject that Mr. McAuley lays bare. . . . [He] tells this haunting saga in eloquent detail. As French anti-Semitism rises once again today, the effect is nothing less than chilling.”—Diane Cole, Wall Street Journal

“A comprehensive and accessible account of one of the great communal acts of generosity—and then betrayal—in modern history.”—Nicholas Wroe, The Guardian

“Deeply researched and elegantly written. . . . Astute and perceptive. . . . McAuley’s nuanced narrative leaves the reader with a range of villains from which to choose.”—Ori Z. Soltes, Washington Post

“Provides a new narrative that is at once rigorous and sensitive [and] endows these ‘houses of fragile things,’ which are still standing today, with a new solidity and life.”—Vincent Delieuvin, Art Newspaper

“This group portrait re-creates the milieu of fin-de-siècle French Jewish dynasties like the Rothschilds and the Camondos through the art collections they amassed. . . . McAuley chronicles how many of his central figures were deported by the Vichy government and describes the fate of their collections. A study of ‘obsessions with objects’ becomes a darker tale.”—New Yorker

“McAuley’s book provides not just an insight into the gathering and displaying of these collections, but into the lives of the men and women who put them together, and the extent to which they saw themselves as intrinsic members of the French establishment.”—Caroline Moorehead, Times Literary Supplement

“Unsettling. . . . As much as McAuley seeks to recover histories effaced by the Holocaust, [he] emphasizes that these histories persist in our present.”—Chelsea Haines, Art in America

“[McAuley] has a tenderness for his subjects framed by a beautiful moral register. His conclusions are chilling.”—Helen Elliott, The Monthly (Australia)

“Elegantly written and deeply moving. . . . A meditation on the shaping and expression of identities through the acquisition and donation of beautiful things, a glimpse into a world blasted to dust by the horrors of the twentieth century, and a tragic story about the unrequited love of men and women for a country that savagely turned on them. . . . [A] haunting book.”—David A. Bell, New York Review of Books

“Engaging and poignant.”—Hannah Stamler, The Nation

Selected by ARTnews for its “Collectors’ Reading List: Seven Books Every Budding Collector Should Own”

“By reminding us how extensive France’s unforgiving anti-Semitism was under Vichy, McAuley not only sheds light on a discomforting slice of French history. He also provides a timely contribution to France’s polarizing contemporary debates about what it means to be French.”—Tom Peebles, Tocqueville 21

“This is the book I have been waiting for. A magisterial account of aspiration and loss. Please read it.”—Edmund de Waal

“A haunting and melancholy book that brings to life a wealthy but beleaguered Jewish milieu that was determined to demonstrate its loyalty to France.”—Philip Nord, author of France 1940: Defending the Republic

“A remarkable book. I’ve finished reading with a sense of wonder at the unknown world its author recreates for us, and with shock at how senselessly that world was destroyed.”—Alice Kaplan, author of Looking for The Stranger: Albert Camus and the Life of a Literary Classic

“Fascinating, sensitive and heartbreaking, deeply researched and elegantly written, filled with flamboyant dynasties of art collectors, McAuley guides us between the chic glamourous sophistication of the Paris art world and the murderous greed of the Nazis and their collaborators.”—Simon Sebag Montefiore

“Beautifully written, astoundingly researched and penetrating in its gaze into an irrecoverable world, both Parisian, European and Jewish, James McAuley vividly revives a past now on the brink of escaping living memory. The House of Fragile Things is a book about art, France, the Holocaust and what it can mean to be a Jew, that will haunt you long after you have read it.”—Ben Judah, author of This Is London