The Book of Mormon: The Earliest Text (Paperback) 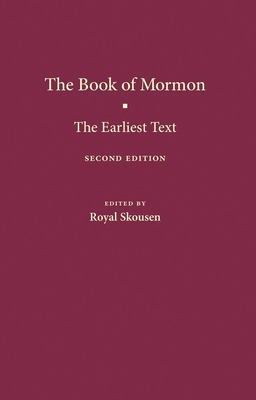 Now in paperback, this corrected text is based on the earliest sources and represents the most accurate and readable edition of the Book of Mormon ever published

"The product of over two decades of painstaking labor by Royal Skousen . . . this Yale edition aims to take us back to the text Smith envisioned as he translated, according to the faithful, from golden plates that he unearthed in upstate New York."—Stephen Prothero, Wall Street Journal

“Will forever change the way Latter-day Saints approach modern scripture. Two hundred years from now… students of the Book of Mormon will still be poring over Skousen’s work. What he has accomplished is nothing short of phenomenal.”—Grant Hardy, Journal of Book of Mormon Studies

First published in 1830, the Book of Mormon is the authoritative scripture of the Church of Jesus Christ of Latter-day Saints. Over the past thirty years, editor Royal Skousen has pored over Joseph Smith’s original manuscripts and earliest editions and identified about 2,250 textual errors, although many of these discrepancies stem from inadvertent errors in copying and typesetting the text.

The first edition of The Book of Mormon: The Earliest Text, published in 2009 to critical acclaim, contained over 600 corrections that had never before appeared in any standard edition of the Book of Mormon, with about 250 of them affecting the text’s meaning. This revised, second edition, issued in paperback, includes additional corrections as well as an illuminating new introduction by Royal Skousen. It will provide a portable, accessible version of this important text.

Royal Skousen is Emeritus Professor of Linguistics at Brigham Young University, where he taught for 41 years. He is the author of numerous books on linguistic theory and on the Book of Mormon text. He lives in Spanish Fork, UT.

"The product of over two decades of painstaking labor by Royal Skousen—a Brigham Young University professor of linguistics and English language, a Mormon and an occasional spelling-bee judge—this Yale edition aims to take us back to the text Smith envisioned as he translated, according to the faithful, from golden plates that he unearthed in upstate New York."—Stephen Prothero, Wall Street Journal

"A work of unique aesthetic and scholarly value, and an essential resource for scholarly approaches to the Book of Mormon."—Seth Perry, Journal of Ecclesiastical History

"Readers would do better to hear the Book of Mormon for what it is – a long, mostly sad story, told aloud. Royal Skousen has spent more than twenty years trying to get at that story told aloud, and it is hard to imagine coming closer than his 'earliest text.'"—Seth Perry, Journal of Ecclesiastical History

"This volume is the full text of the Book of Mormon and is as close as possible to the original dictation by Joseph Smith. Because of the way Skousen arranged the text on the page, this is the easiest-to-read Book of Mormon in existence."—Michael De Groote, Mormon Times

"Very important . . . the bottom-line results of one of the most impressive and sustained individual scholarly undertakings in the history of Mormonism . . . [in] a single, convenient volume . . . readily accessible . . . wonderful . . . a great study edition."—Daniel Peterson, Mormon Times

"Although it is the result of meticulous scholarship . . . this is a book that transcends the scholarship. It should appeal to a wider readership . . . as a contribution to experiencing the Book of Mormon."—Brant A. Gardner, Journal of Mormon History

Listed as one of the "Christmas gifts for your demanding scholar" in 2009, Mormon Times

"Royal Skousen has single-handedly brought the textual analysis of the Book of Mormon to a professional level on par with the finest classical and biblical scholarship. This volume is the culmination of his labors, and it is the most textually significant edition since Joseph Smith’s work was first published in 1830.  It takes us back to the original manuscript (as best we can reconstruct it) and sometimes beyond, to the very words that were first spoken by Joseph Smith to his scribes."—Grant Hardy, from the Introduction