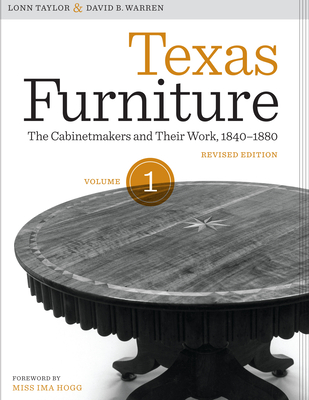 The art of furniture making flourished in Texas during the mid-nineteenth century. To document this rich heritage of locally made furniture, Miss Ima Hogg, the well-known philanthropist and collector of American decorative arts, enlisted Lonn Taylor and David B. Warren to research early Texas Furniture and its makers. They spent more than a decade working with museums and private collectors throughout the state to examine and photograph representative examples. They also combed census records, newspapers, and archives for information about cabinetmakers. These efforts resulted in the 1975 publication of Texas Furniture, which quickly became the authoritative reference on this subject.

Now updated with an expanded Index of Texas Cabinetmakers that includes information that has come to light since the original publication and corrects errors, Texas Furniture presents a catalog of more than two hundred pieces of furniture, each superbly photographed and accompanied by detailed descriptions of the piece’s maker, date, materials, measurements, history, and owner, as well as an analysis by the authors. The book also includes chapters on the material culture of nineteenth-century Texas and on the tools and techniques of nineteenth-century Texas cabinetmakers, with a special emphasis on the German immigrant cabinetmakers of the Hill Country and Central Texas. The index of Texas cabinetmakers contains biographical information on approximately nine hundred men who made furniture in Texas, and appendices list information on the state’s largest cabinet shops taken from the United States census records.

Lonn Taylor is an authority on the architecture, furniture, and decorative arts of the American Southwest. He had a twenty-year career at the Smithsonian Institution’s National Museum of American History in Washington, D.C., and also served as director of the University of Texas at Austin’s Winedale Historical Center.