They Knew: The US Federal Government's Fifty-Year Role in Causing the Climate Crisis (Hardcover) 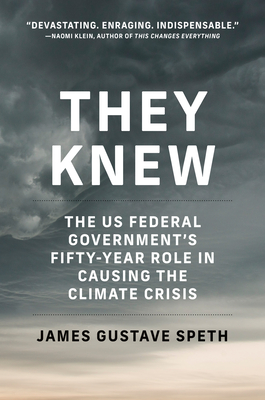 A devastating, play-by-play account of the federal government's leading role in bringing about today's climate crisis.

In 2015, a group of twenty-one young people sued the federal government for violating their constitutional rights by promoting the climate catastrophe, depriving them of life, liberty, and property without due process of law. They Knew offers evidence for their claims, presenting a devastating, play-by-play account of the federal government's role in bringing about today's climate crisis. James Speth, tapped by the plaintiffs as an expert on climate, documents how administrations from Carter to Trump--despite having information about climate change and the connection to fossil fuels--continued aggressive support of a fossil fuel based energy system.

Since Juliana v. United States was filed, the federal government has repeatedly delayed the case. Yet even in legal limbo, it has helped inspire a generation of youthful climate activists.

An Our Children’s Trust Book

James Gustave Speth served as member and chairman of the U.S. Council on Environmental Quality during the Carter Administration and from 1993 to 1999 was Administrator of the United Nations Development Programme and served as chair of the UN Development Group. A retired Professor of Law and Senior Fellow at the Vermont Law School, he has also taught at Georgetown and Yale. He is the founder of World Resources Institute and a cofounder of Natural Resources Defense Council.

"A rousing condemnation of a system bent on short-term gain against long-term health."
—Kirkus Reviews

"Drawing on first-hand knowledge from his time as chair of the US Council on Environmental Quality during the administration of president Jimmy Carter (1977–81), and his founding role in several major environmental non-governmental organizations, Speth gives a clear and concise account of the scientific evidence available to successive US presidents and Congresses over five decades. He provides a chilling description of the gulf between the safer course of action recommended by scientists and advisers, and the reality of federal policy."
—Nature

"Working pro bono [for Juliana v. United States], Speth produced a lengthy report tracing nearly 60 years of federal action on climate change and fossil fuel development. That report is the foundation for this book. Parts of the story have been told before... but Speth's volume covers a broader period of time, says more about federal encouragement of fossil fuels, and as befits a legal filing, is richly documented."
—Science

"The road to climate hell has long been paved with deniability. While climate scientists over the past half century have amassed evidence that the use of fossil fuels is bringing about environmental disaster, US presidents and congresses have been steadfast in looking the other way. The publication of this well-researched, damning examination and indictment of federal policies will make it impossible to assert ignorance ever again.”
—Yale Alumni Magazine

"They Knew is a must-read, because this book is not so much ‘history’ as it is a window into the present, in which the pressures from the fossil fuel industry and the processes of government collide. The more we can see what they knew then, the greater the possibility that we can contend with what we know now."
—YES! Magazine

"Gus Speth’s new book is an enlightening and infuriating academic masterpiece, a detailed history of the US federal actions and inactions on climate change, a biting indictment and fascinating read."
—Udo E. Simonis, Journal of Environmental Law and Policy