Lost Voices from the Titanic: The Definitive Oral History (Hardcover) 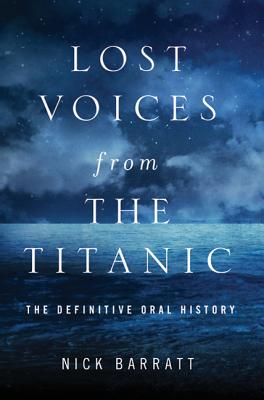 By Nick Barratt
$28.00
Hard to Find - May no longer be available

The world has been deluged with enough accounts of the Titanic tragedy to sink the ship without help from an iceberg. This book, however, is a particularly revealing one, incorporating many first-hand accounts by survivors into the story of the doomed ocean liner. — Alden Graves

On April 15, 1912, the HMS" Titanic "sank, killing 1,517 people and leaving the rest clinging to debris in the frozen waters of the North Atlantic awaiting rescue. Here, historian Nick Barratt tells the ship's full story, starting from its original conception and design by owners and naval architects at the White Star Line through its construction at the shipyards in Belfast. "Lost Voices From the Titanic" offers tales of incredible folly and unimaginable courage the aspirations of the owners, the efforts of the crew, and of course, the eyewitness accounts from those lucky enough to survive.

In narrating the definitive history of the famous ship, Barratt draws from never before seen archive material and eyewitness accounts by participants at every stage of the "Titanic"'s life. These long-lost voices bring new life to those heartbreaking moments on the fateful Sunday night when families were torn apart and the legend of the "Titanic" was cemented in our collective imagination.

Nick Barratt is a broadcaster and historian. He runs Sticks Research Agency as well as writing for newspapers and various magazines. He is director of Firebird Media and is on the Public History Committee of the Historical Association. He lives in London.

“In this book, the dramatic story of the world's most famous ship is told through the voices of those who were there. If you want to know more about Titanic, this is the book to read.” --Dr. Robert D. Ballard, co-discoverer of the RMS Titanic
"A fascinating new book that includes first-hand accounts, many previously unpublished, from survivors of Titanic’s maiden voyage."--Daily Express (UK)

"Barratt makes available to readers for the first time a wealth of primary documents and sources--and that is a very good thing. And, much to his credit, he does so without any agenda to advance, point of view to promote, or axes of any kind to grind: he lets the documents speak for themselves. For people who want to know more of the story of the Titanic from the perspective of her time as well as the men and women who built and sailed her, this book is a rare resource." -- Daniel Allen Butler, author of Unsinkable and The Other Side of the Night
"Anyone who wonders what more could possibly be written about the Titanic will be surprised and delighted by Nick Barratt's book.  It is an invaluable compilation that brings to light an array of fascinating, often moving documents that have never before been published."--Steven Biel, author of Down with the Old Canoe: A Cultural History of the Titanic Disaster
"Chockfull of information" --Booklist "What sets this book apart from others that have been published on this subject is that survivors are given the opportunity to tell their personal stories, in their own words, and unedited. The result is heartbreaking in detail and illuminating in its authenticity."--Tucson Citizen