For the Sake of the Common Good: Essays in Honour of Lois Wilson (Paperback) 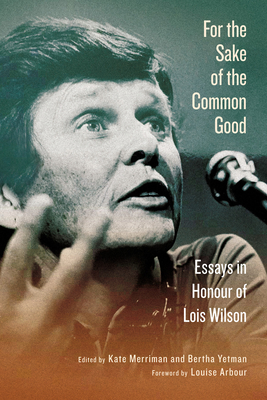 Born in Winnipeg in 1927, Lois Wilson was the first female moderator of the United Church of Canada, the first female president of the Canadian Council of Churches, and the first woman and first Canadian president of the North American region of the World Council of Churches. A respected human rights defender and activist for peace and social justice around the world, she was appointed by successive Canadian governments to head missions in Korea, El Salvador, Guatemala, and Sudan, among others, over her long and distinguished career. For the Sake of the Common Good is a tribute to the life and work of this remarkable Canadian. It brings together contributions from internationally recognized figures such as Louise Arbour, Lloyd Axworthy, and Irwin Cotler; national leaders such as Bill Blaikie, Alia Hogben, Mary Jo Leddy, Stan McKay, and Michael Blair; and local heroes such as Alexa Gilmour and Brent Hawkes, who have been influenced by Lois Wilson’s practical Christianity, progressive values, and commitment to ending oppression in all forms. Their essays urge us to think about the many ways we can work toward the common good: by welcoming refugees, developing ecologically sustainable ways of life, repairing relations with Indigenous Peoples, protecting the rights of LGBTQ+ people and all who are oppressed, defending political prisoners, and respecting religious rights and the place of faith in public life. In such ways, we can restore right relations with the Earth and with each other. For the Sake of the Common Good gratefully acknowledges Lois Wilson’s inspiring legacy while taking on the important task of continuing her work.

Kate Merriman is an Anglican priest serving as honorary assistant at the Cathedral Church of St James, Toronto, and a freelance editor. Bertha Yetman is an educator and social justice activist, currently working with Roman Catholic religious communities on a guaranteed livable income.

“Inspiring and insightful, this stimulating volume shows that the work of Lois Wilson from decades ago continues to bear fruit today. Written by a diverse group of people – scholars, politicians, pastors, social workers, and activists – For the Sake of the Common Good gives testament to the wide-ranging interest and influence of Wilson, and, like Wilson, the writers exhibit a keen commitment to bettering public life.” Carol Penner, University of Waterloo