The Dawn of the Deed: The Prehistoric Origins of Sex (Paperback) 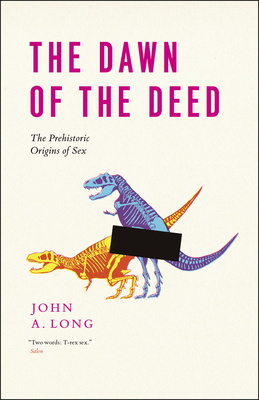 Do you like dinosaurs? Do you like sex? Well, then this book will suit you -combining the science of those two subjects in an easy to digest manner while teaching you things to liven up any conversation. — Becki Trudell

We all know about the birds and the bees, but what about the ancient placoderm fishes and the dinosaurs? The history of sex is as old as life itself—and as complicated and mysterious. And despite centuries of study there is always more to know. In 2008, paleontologist John A. Long and a team of researchers revealed their discovery of a placoderm fish fossil, known as “the mother fish,” which at 380 million years old revealed the oldest vertebrate embryo—the earliest known example of internal fertilization. As Long explains, this find led to the reexamination of countless fish fossils and the discovery of previously undetected embryos. As a result, placoderms are now considered to be the first species to have had intimate sexual reproduction or sex as we know it—sort of.
Inspired by this incredible find, Long began a quest to uncover the paleontological and evolutionary history of copulation and insemination. In The Dawn of the Deed, he takes readers on an entertaining and lively tour through the sex lives of ancient fish and exposes the unusual mating habits of arthropods, tortoises, and even a well-endowed (16.5 inches!) Argentine Duck. Long discusses these significant discoveries alongside what we know about reproductive biology and evolutionary theory, using the fossil record to provide a provocative account of prehistoric sex. The Dawn of the Deed also explores fascinating revelations about animal reproduction, from homosexual penguins to monogamous seahorses to the difficulties of dinosaur romance and how sexual organs in ancient shark-like fishes actually relate to our own sexual anatomy.
The Dawn of the Deed is Long’s own story of what it’s like to be a part of a discovery that rewrites evolutionary history as well as an absolutely rollicking guide to sex throughout the ages in the animal kingdom. It’s natural history with a naughty wink.

John A. Long is vice president of research and collections at the Natural History Museum of Los Angeles County. His other books include, most recently, Frozen in Time: Prehistoric Life of Antarctica and The Rise of Fishes.

“You are now holding a compromise between a book that you should carry hidden inside an opaque bag, and a sober respectable scientific treatise. It′s a deliciously written account of the evolution of sex, in all of its bizarre manifestations. Read, blush, and enjoy!”

“John Long is renowned as the discoverer of the earliest evidence for internal fertilization. In a book encompassing 380 million years of sexual evolution, he lays the full significance of his discoveries in fascinating context.”
— Tim Flannery, author of Here on Earth

“You know that any book on evolutionary theory that opens with the story of erotic asphyxiation—strangling your sex partner to deplete oxygen to heighten orgasmic intensity—and how even a normal orgasm is so intense as to simulate a mini death through a momentary loss of consciousness at the point of climax, is going to be a great read. And so it is in this marvelously entertaining and remarkably informative book on the evolution of sex by paleontologist John Long, one of the world’s leading experts on teasing out of the fossil record the history of sex over the past several hundred million years. This book is erotica for empiricists.”
— Michael Shermer, publisher of Skeptic Magazine

“Combining thoughtful science with sheer fun, this book is impossible to put down. . . . John A. Long looks at evidence from the fossil record, examines mating patterns and sexual preferences of living animals, and discusses the attributes of various sexual organs (including the size and speed of ejaculations for males of many species). The book is far from prurient, even though it’s intriguing to hypothesize how 70-ton dinosaurs might have copulated. Long provides great insight into the process of science and makes the compelling case that understanding the history of sexual congress offers incontrovertible documentation of the evolutionary process.”
— Publishers Weekly

"In this entertaining book, the author traces the evolution of sex, tackling the subject from a paleontological and—to a lesser extent—sociological perspective. The prose is lively and informative, without getting bogged down in tricky terminology or technical discussions only experts would be able to follow; and the book is full of surprising revelations (like the fact that ancient fish copulated male-on-female, rather than spawning in the water as modern fish do)."
— Booklist

"From male guinea pigs that deposit copulatory plugs to hinder competitors, to dust mites which inseminate their partners by stabbing their abdomens, it's impossible to read The Dawn of the Deed without a wry smile or raised eyebrow."
— New Scientist

“This highly entertaining book remarkably informative book on the evolution of sex Dust mites inseminate their partners by stabbing their abdomens. The Argentine duck’s penis measures a whopping 16.5 inches. Ancient fish copulated male-on-female, rather than spawning in the water as modern fish do. These are a just a few of the revelations in paleontologist John Long’s highly entertaining and informative book on the evolution of sex.”
— Audobon