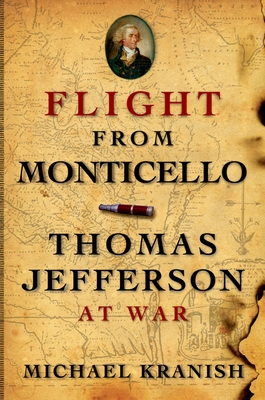 When Thomas Jefferson wrote his epitaph, he listed as his accomplishments his authorship of the Declaration of Independence and the Virginia statute of religious freedom, and his founding of the University of Virginia. He did not mention his presidency or that he was second governor of the state of Virginia, in the most trying hours of the Revolution. Dumas Malone, author of the epic six-volume biography, wrote that the events of this time explain Jefferson's "character as a man of action in a serious emergency." Joseph Ellis, author of American Sphinx, focuses on other parts of Jefferson's life but wrote that his actions as governor "toughened him on the inside." It is this period, when Jefferson was literally tested under fire, that Michael Kranish illuminates in Flight from Monticello. Filled with vivid, precisely observed scenes, this book is a sweeping narrative of clashing armies--of spies, intrigue, desperate moments, and harrowing battles. The story opens with the first murmurs of resistance to Britain, as the colonies struggled under an onerous tax burden and colonial leaders--including Jefferson--fomented opposition to British rule. Kranish captures the tumultuous outbreak of war, the local politics behind Jefferson's actions in the Continental Congress (and his famous Declaration), and his rise to the governorship. Jefferson's life-long belief in the corrupting influence of a powerful executive led him to advocate for a weak governorship, one that lacked the necessary powers to raise an army. Thus, Virginia was woefully unprepared for the invading British troops who sailed up the James under the direction of a recently turned Benedict Arnold. Facing rag-tag resistance, the British force took the colony with very little trouble. The legislature fled the capital, and Jefferson himself narrowly eluded capture twice. Kranish describes Jefferson's many stumbles as he struggled to respond to the invasion, and along the way, the author paints an intimate portrait of Jefferson, illuminating his quiet conversations, his family turmoil, and his private hours at Monticello. "Jefferson's record was both remarkable and unsatisfactory, filled with contradictions," writes Kranish. As a revolutionary leader who felt he was unqualified to conduct a war, Jefferson never resolved those contradictions--but, as Kranish shows, he did learn lessons during those dark hours that served him all his life.

Michael Kranish is a reporter in the Washington bureau of The Boston Globe. He is the co-author of the New York Times bestseller John F. Kerry: The Complete Biography, described by Michiko Kakutani as "a fascinating portrait...a harrowing, pictorial narrative."