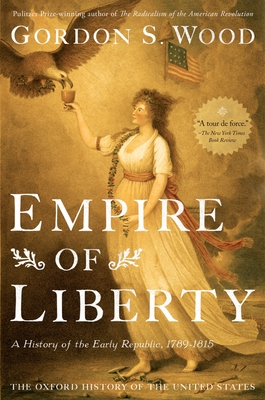 Pulitzer winner Wood delivers a masterpiece in this survey of the early American republic (1789-1815). Smooth, clear writing, comprehensive scholarship, and insights acquired over a lifetime of study. — Bill Lewis

The Oxford History of the United States is by far the most respected multi-volume history of our nation. The series includes three Pulitzer Prize winners, two New York Times bestsellers, and winners of the Bancroft and Parkman Prizes. Now, in the newest volume in the series, one of America's
most esteemed historians, Gordon S. Wood, offers a brilliant account of the early American Republic, ranging from 1789 and the beginning of the national government to the end of the War of 1812.
As Wood reveals, the period was marked by tumultuous change in all aspects of American life--in politics, society, economy, and culture. The men who founded the new government had high hopes for the future, but few of their hopes and dreams worked out quite as they expected. They hated political
parties but parties nonetheless emerged. Some wanted the United States to become a great fiscal-military state like those of Britain and France; others wanted the country to remain a rural agricultural state very different from the European states. Instead, by 1815 the United States became something
neither group anticipated. Many leaders expected American culture to flourish and surpass that of Europe; instead it became popularized and vulgarized. The leaders also hope to see the end of slavery; instead, despite the release of many slaves and the end of slavery in the North, slavery was
stronger in 1815 than it had been in 1789. Many wanted to avoid entanglements with Europe, but instead the country became involved in Europe's wars and ended up waging another war with the former mother country. Still, with a new generation emerging by 1815, most Americans were confident and
optimistic about the future of their country.
Named a New York Times Notable Book, Empire of Liberty offers a marvelous account of this pivotal era when America took its first unsteady steps as a new and rapidly expanding nation.

Gordon S. Wood is Alva O. Way Professor of History Emeritus at Brown University. His books include the Pulitzer Prize-winning The Radicalism of the American Revolution, the Bancroft Prize-winning The Creation of the American Republic, 1776-1787, The Americanization of Benjamin Franklin, and ThePurpose of the Past: Reflections on the Uses of History. He writes frequently for The New York Review of Books and The New Republic.

"On every page of this book, Wood's subtlety and erudition show. Grand in scope and a landmark achievement of scholarship, Empire of Liberty is a tour de force, the culmination of a lifetime of brilliant thinking and writing."


"Empire of Liberty will rightly take its place among the authoritative volumes in this important and influential series."