Walking Among Pharaohs: George Reisner and the Dawn of Modern Egyptology (Hardcover) 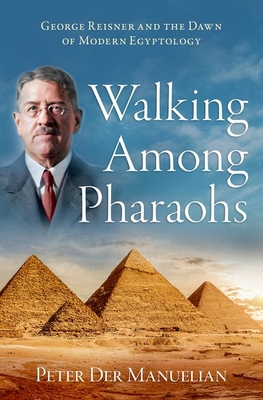 In this expansive new biography of George Reisner, Egyptologist Peter Der Manuelian examines the life and work of America's greatest archaeologist. Manuelian presents Reisner's undeniable impact and considers his life within the context of Western colonialism, racism, and nationalism. Pyramids with hidden burial chambers. Colossal royal statues and minuscule gold jewelry. Decorated tomb chapels, temples, settlements, fortresses, ceramics, furniture, stone vessels, and hieroglyphic inscriptions everywhere. This is the legacy of forty-three years of breathtakingly successful excavations at twenty-three different archaeological sites in Egypt and Sudan (ancient Nubia). George Reisner (1867-1942) discovered all this and more during a remarkable career that revolutionized archaeological method in both the Old World and the New. Leading the Harvard University-Boston Museum of Fine Arts Expedition, Reisner put American Egyptology on the world stage. His uniquely American success story unfolded despite British control of Egyptian politics, French control of Egyptian antiquities, and an Egypt yearning for independence, all while his Egyptian teams achieved the fieldwork results and mastered the arts of recording and documentation. Reisner's lifespan covers the birth of modern archaeology. It also intersects powerfully with aspects of colonialism, racism, and nationalism, as Western powers imposed their influence on Egypt especially during the two World Wars. The wholesale export of dynastic Egypt's treasures to European and American museums also raised issues of repatriation and cultural patrimony long before they became the hot topics they are today. Walking Among Pharaohs, by distinguished Egyptologist Peter Der Manuelian, gathers unpublished documents from all over the world to present a fascinating and intimate biography of one of the founding fathers of modern Egyptology and one of America's greatest archaeologists.

Peter Der Manuelian is Barbara Bell Professor of Egyptology in both the Near Eastern Languages and Civilizations and the Anthropology Departments at Harvard University, and director of the Harvard Museum of the Ancient Near East. He is Director of the Giza Project, which aims to collect and present online all past, present, and future archaeological activity at the Giza Pyramids. Among his numerous scholarly and children's books on ancient Egypt are Digital Giza: Visualizing the Pyramids, Slab Stelae of the Giza Necropolis, and 30-Second Ancient Egypt.