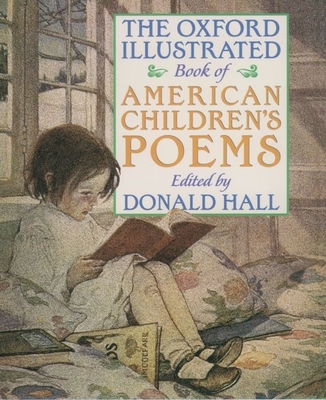 The Oxford Illustrated Book of American Children's Poems, edited by Donald Hall, is an incredible anthology which spans two centuries. The collection of 81 poems opens with anonymous Native American cradlesongs and ends with the unique voices of contemporary poetry. In between is a great mix of classics, old and new. The wide range of voices and styles are complemented by archival illustrations in black & white and color which transport the reader to different time periods, making each poem its own history lesson. What makes this book a treasure is Donald Hall's selection of an eclectic mix of poems, which reflects and honors the diversity of American culture. — Northshire Staff

American children's poetry began with Native American cradle songs, moved on to a rhymed alphabet, blossomed in the 19th century with "A Visit from St. Nicholas," expanded widely in the 20th century, and continues with vigor into the new millennium. Some of the best of these poems, however, have been neglected or forgotten. This collection, edited by acclaimed children's author and poet Donald Hall, returns the forgotten treasures of American children's poetry. Featuring some of the best of children's book illustration-including archival selections from rare and early editions and pictures from now defunct 19th- and early-20th-century children's magazines-this anthology revives not only the classic poems but also the atmosphere of the periods in which they were written and read. Starting with anonymous Native American verses and a selection from the 1727 New England Primer, "Alphabet," this book spans two centuries of American children's poetry. Immediately recognizable names, including Emily Dickinson, Robert Frost, Carl Sandburg, and T. S. Eliot are joined by talented contemporary poets like Gwendolyn Brooks, Sandra Cisneros, Janet S. Wong, and others. Perennial favorites-such as "The Three Little Kittens" and "Casey at the Bat"-are mixed in with new classics, such as Shel Silverstein's "Sarah Cynthia Sylvia Stout Would Not Take the Garbage Out." Poems about holidays appear with verses for recitation, nursery rhymes, poems for laughter, bedtime verses, scary poems, and animal poems. In recognition of America's diverse nature, the selections in this anthology reflect a variety of backgrounds and experiences. From anonymous African-American poets we step forward through the ages to admire the talents of Langston Hughes, Sonia Sanchez, and Francisco X. Alarc�n. Children will love discovering these gems, and both parents and teachers will delight in reading to children from this book.

Donald Hall is the author of many children's favorites, including The Ox-Cart Man (a Caldecott Medal winner), I Am the Dog, I Am the Cat and Lucy's Summer, and the editor of The Oxford Book of Children's Verse in America (OUP, 1985). He has also written a dozen books of poetry, most recently Without. He lives on a farm in New Hampshire.