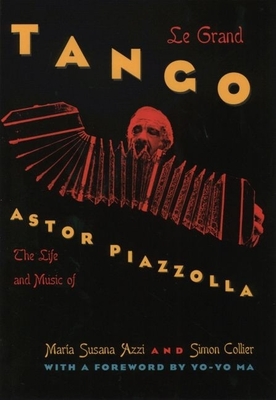 Astor Piazzolla was a musical genius, a man who used the national dance of Argentina as raw material for a whole new musical genre. In Le Grand Tango, Mar a Susana Azzi and Simon Collier vividly capture the life of this extraordinary musician--a visionary who won worldwide acclaim, but sparked
bitter controversy in his native land.
Azzi and Collier trace Piazzolla's early life from his birth in Argentina in 1921 to his childhood years on the Lower East Side of Manhattan, where he first developed a talent for the bandoneon, the accordion-like instrument central to the tango. They describe his return to Argentina at age 16
and his rapid rise in the intoxicating world of tango, where he quickly earned a place with the leading dance band, and then formed his own group. But at the height of his success, Piazzolla decided to take tango music to a new level and studied composition with the legendary Nadia Boulanger in
Paris. Combining deft musical analysis and intriguing personal insight, Azzi and Collier show how he created a dramatically new style of tango music influenced by jazz and classical pieces--a tango music meant for listening, not dancing. But they also show that, in the birthplace of the tango, he
met fierce resistance. He eventually left Argentina for Europe, where he emerged as an international celebrity.
Since Piazzolla's death in 1992, his influence has only grown. Jazz giants such as Gary Burton and Al Di Meola--and classical stars Yo-Yo Ma, Emanuel Ax, and Daniel Barenboim--have all recorded albums of his works. Now Azzi and Collier have given us the first biography of this astonishingly
gifted musician.