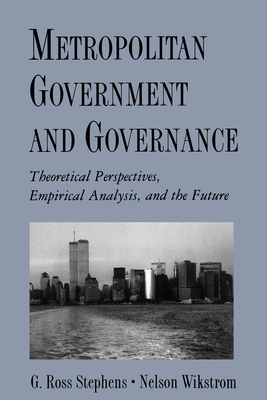 Written by two prominent political scientists working in the field of local government theory and practice, Metropolitan Government and Governance offers a comprehensive understanding of the nature of local and metropolitan government and its relationship to the larger intergovernmental system. It examines a wide range of common governmental practices and issues relating to local government in metropolitan areas as well as local government generally in the United States. Stephens and Wikstrom define and present several theoretical and applied perspectives including the consolidationist one-government approach; federative efforts to create two-tier regional governments; the public choice approach which justifies the fragmented governmental structures that exist in most metropolitan areas; incremental change in relationships and roles; and regionalism which promotes regional political cultures. Each of these approaches is illustrated with concrete examples including seven case studies of major structural reforms that highlight strengths and weaknesses of different approaches to this issue. The book also analyzes citizen support and opposition to various types of reform in both central cities and suburban areas. More generally, it discusses the range of options available to urban governments faced with growing problems of decreased federal funding and increasing demands regarding quality-of-life issues. Based on past findings and experience, Stephens and Wikstrom propose a new model for the future governance of America's urban areas. They conclude with the argument that states must assume a more assertive role with regard to the structure of local governmental and service delivery in the nations 300 plus metropolitan regions. Metropolitan Government and Governance is a comprehensive analytical inquiry that is not only highly appropriate for students of political science and public administration, but will also be of value to scholars and policymakers as well.