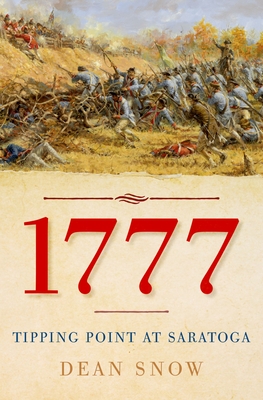 By Dean Snow
$19.95
Click Title for IN STOCK Location

An hour-by-hour account of the Battle of Saratoga, 1777 places readers in its 33-day whirlwind of combat, strategies, blunders, and triumphs. Expert storytelling and meticulous research illuminate rash Benedict Arnold, champagne-sipping John Burgoyne, officers, enlisted men, and families. 1777 presents a realistic and sympathetic retelling of the Battle that made America.

In the autumn of 1777, near Saratoga, New York, an inexperienced and improvised American army led by General Horatio Gates faced off against the highly trained British and German forces led by General John Burgoyne. The British strategy in confronting the Americans in upstate New York was to separate rebellious New England from the other colonies. Despite inferior organization and training, the Americans exploited access to fresh reinforcements of men and materiel, and ultimately handed the British a stunning defeat. The American victory, for the first time in the war, confirmed that independence from Great Britain was all but inevitable. Assimilating the archaeological remains from the battlefield along with the many letters, journals, and memoirs of the men and women in both camps, Dean Snow's 1777 provides a richly detailed narrative of the two battles fought at Saratoga over the course of thirty-three tense and bloody days. While the contrasting personalities of Gates and Burgoyne are well known, they are but two of the many actors who make up the larger drama of Saratoga. Snow highlights famous and obscure participants alike, from the brave but now notorious turncoat Benedict Arnold to Frederika von Riedesel, the wife of a British major general who later wrote an important eyewitness account of the battles. Snow, an archaeologist who excavated on the Saratoga battlefield, combines a vivid sense of time and place with details on weather, terrain, and technology and a keen understanding of the adversaries' motivations, challenges, and heroism into a suspenseful, novel-like account. A must-read for anyone with an interest in American history, 1777 is an intimate retelling of the campaign that tipped the balance in the American War of Independence.

Dean Snow is Professor Emeritus of Anthropology at Penn State University and past president of the Society for American Archaeology. His previous books include Archaeology of Native North America and The Iroquois.