Roadshow!: The Fall of Film Musicals in the 1960s (Paperback) 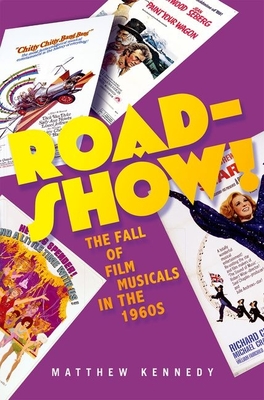 You probably didn’t realize how close Julie Andrews came to destroying Hollywood. This is a delightfully readable account of a period in movie history when all the major studios were desperately trying to emulate the success of The Sound of Music. Vastly informative and entertaining without ever being smug or catty, A must read for film buffs. — Alden Graves

Full-page newspaper ads announced the date. Reserved seats went on sale at premium prices. Audience members dressed up and arrived early to peruse the program during the overture that preceded the curtain's rise. And when the show began, it was--a rather disappointing film musical. In Roadshow , film historian Matthew Kennedy tells the fascinating story of the downfall of the big-screen musical in the late 1960s. It is a tale of revolutionary cultural change, business transformation, and artistic missteps, all of which led to the obsolescence of the roadshow, a marketing extravaganza designed to make a movie opening in a regional city seem like a Broadway premier. Ironically, the Hollywood musical suffered from unexpected success. Facing doom after its bygone heyday, it suddenly broke box-office records with three rapid-fire successes in 1964 and 1965: Mary Poppins, My Fair Lady, and The Sound of Music. Studios rushed to catch the wave, but everything went wrong. Kennedy takes readers inside the making of such movies as Hello, Dolly and Man of La Mancha, showing how corporate management imposed financial pressures that led to poor artistic decisions-for example, the casting of established stars regardless of vocal or dancing talent (such as Clint Eastwood in Paint Your Wagon). And Kennedy explores the impact of profound social, political, and cultural change. The traditional-sounding Camelot and Doctor Dolittle were released in the same year as Sergeant Pepper's Lonely Hearts Club Band, representing a vast gulf in taste. The artifice of musicals seemed outdated to baby boomers who grew up with the Cuban missile crisis, the Kennedy and Martin Luther King Jr. assassinations, race riots, and the Vietnam War. From Julie Andrews to Barbra Streisand, from Fred Astaire to Rock Hudson, Roadshow offers a brilliant, gripping history of film musicals and their changing place in our culture.