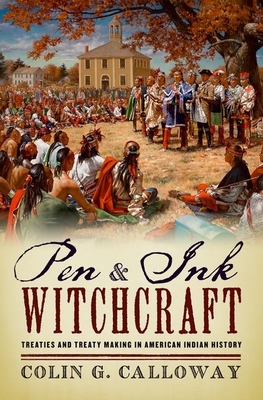 A tragic and sordid story brilliantly explained in just 250 pages by a careful scholar. The kind of book that should be required reading for a wide audience seeking real understanding of the brutal racism and unstoppable avarice that emerged in colonial America and held center stage throughout the 19th century. — Bill Lewis

Indian peoples made some four hundred treaties with the United States between the American Revolution and 1871, when Congress prohibited them. They signed nine treaties with the Confederacy, as well as countless others over the centuries with Spain, France, Britain, Mexico, the Republic of Texas, Canada, and even Russia, not to mention individual colonies and states. In retrospect, the treaties seem like well-ordered steps on the path of dispossession and empire. The reality was far more complicated. In Pen and Ink Witchcraft, eminent Native American historian Colin G. Calloway narrates the history of diplomacy between North American Indians and their imperial adversaries, particularly the United States. Treaties were cultural encounters and human dramas, each with its cast of characters and conflicting agendas. Many treaties, he notes, involved not land, but trade, friendship, and the resolution of disputes. Far from all being one-sided, they were negotiated on the Indians' cultural and geographical terrain. When the Mohawks welcomed Dutch traders in the early 1600s, they sealed a treaty of friendship with a wampum belt with parallel rows of purple beads, representing the parties traveling side-by-side, as equals, on the same river. But the American republic increasingly turned treaty-making into a tool of encroachment on Indian territory. Calloway traces this process by focusing on the treaties of Fort Stanwix (1768), New Echota (1835), and Medicine Lodge (1867), in addition to such events as the Peace of Montreal in 1701 and the treaties of Fort Laramie (1851 and 1868). His analysis demonstrates that native leaders were hardly dupes. The records of negotiations, he writes, show that Indians frequently matched their colonizing counterparts in diplomatic savvy and tried, literally, to hold their ground. Each treaty has its own story, Calloway writes, but together they tell a rich and complicated tale of moments in American history when civilizations collided.

Colin G. Calloway is Professor of Native American Studies and John Kimball Jr. Professor of History at Dartmouth College. His books include One Vast Winter Count: The American West before Lewis and Clark, for which he won the Merle Curti Award and the Ray Allen Billington Prize, The Shawnees and theWar for America, The Scratch of a Pen: 1763 and the Transformation of North America, and New Worlds for All. He recently won the 2011 American Indian History Lifetime Achievement Award.