All The King's Men (Paperback) 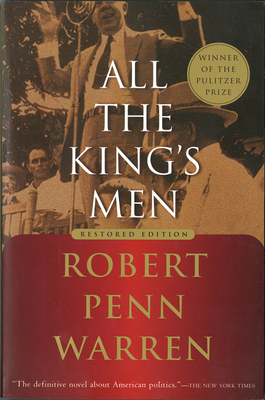 It takes a few pages to get used to Warren's writing style, but once you do, you'll realize that this novel was well deserving of the Pulitzer it won. Visceral and extremely well written. — Chris Morrow

WINNER OF THE PULITZER PRIZE

The fully restored original text of the classic, ever-relevant story of a backcountry lawyer whose idealism is overcome by his lust for power—American literature's definitive political novel.

All the King's Men traces the rise of fall of demagogue Willie Talos, a fiction Southern policitian who resembles the real-life Huey Long of Louisiana. Talos begins his career as an idealistic man of the people, but he soon becomes corrupted by success and the lust for power.

Now Warren's masterpiece has been fully restored and reintroduced by literary scholar Noel Polk, textual editor of the works of William Faulkner. Polk presents the novel as it was originally written, revealing even greater energy, excitement, and complexity.

Robert Penn Warren (1905–1989) won three Pulitzer Prizes, the National Book Award, the National Medal for Literature, and the Presidential Medal of Freedom. In 1986 he was named the country’s first poet laureate.

PRAISE FOR ALL THE KING'S MEN

"Over the course of more than two centuries of vivid political history, there is perhaps only one full-blooded American novel of politics that plunges deep into the hearts of its characters and therefore into the hearts of its readers, thus rising to the top ranks of American fiction. That is Robert Penn Warren's lush All the King's Men."
- L O S A N G E L E S T I M E S B O O K R E V I E W