How the García Girls Lost Their Accents (Penguin Vitae) (Hardcover) 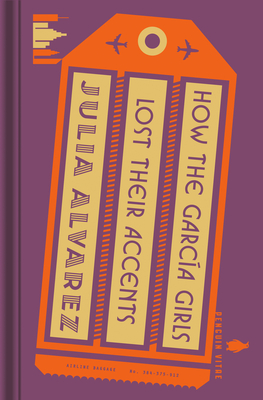 
The García sisters—Carla, Sandra, Yolanda, and Sofía—and their family must flee their home in the Dominican Republic after the discovery of their father's role in an attempt to overthrow the brutal dictator Rafael Trujillo. They arrive in New York City in 1960 to a life far removed from their existence in the Caribbean. In the wondrous but not always welcoming United States, their parents try to hold on to their old ways as the girls try to find new lives: by straightening their hair and wearing American fashions, and by forgetting their Spanish. For them, it is at once liberating and excruciating to be caught between the old world and the new. In Julia Alvarez's beloved first novel, How the García Girls Lost Their Accents, the sisters tell their stories about being at home—and not at home—in America.

Penguin Vitae—loosely translated as "Penguin of one's life"—is a deluxe hardcover series from Penguin Classics celebrating a dynamic and diverse landscape of classic fiction and nonfiction from seventy-five years of classics publishing. Penguin Vitae provides readers with beautifully designed classics that have shaped the course of their lives, and welcomes new readers to discover these literary gifts of personal inspiration, intellectual engagement, and creative originality.

Julia Alvarez left the Dominican Republic for the United States in 1960, at the age of ten. She is the author of numerous works of fiction, nonfiction, and poetry, including the novel In the Time of the Butterflies, which has more than a million copies in print and was selected by the National Endowment for the Arts for its national Big Read program. Alvarez has received the Latina Leader Award in Literature from the Congressional Hispanic Caucus Institute and the Hispanic Heritage Award in Literature; was named Woman of the Year by Latina magazine; and was awarded the National Medal of Arts by President Obama. She lives in Vermont.

Elizabeth Acevedo (foreword) is the New York Times bestselling author of The Poet X, which won the National Book Award for Young People's Literature, as well as With the Fire on High and Clap When You Land. She is a National Poetry Slam champion and holds an MFA in creative writing from the University of Maryland. She lives with her partner in Washington, DC.

“An honest, unflinching narrative that captures the misery, messiness, and marvel of departing from a homeland and making yourself and your family anew . . . Every single character is vibrant, in such a way that all of us longing to belong will find in the novel something that might teach us a bit more about ourselves, and our possibilities. . . . A generation of writers were empowered to pick up their pens after they first picked up this book. . . . [Alvarez] proved that our shared island and the people we come from have rich and nuanced stories that deserve to be told.” ―Elizabeth Acevedo, from the Foreword

“A clear-eyed look at the insecurity and yearning for a sense of belonging that are a part of the immigrant experience . . . Movingly told.” —The Washington Post Book World

“[A] tender, charming book . . . There is a charge to Alvarez’s writing, a poetic intensity, that is truly original.” —The Miami Herald

“A joy to read.” —The Cleveland Plain Dealer

“The Hispanic Joy Luck Club . . . A luminous poem, rich and dreamy as a slow samba. A+.” —Entertainment Weekly

“Subtle . . . Powerful . . . Reveals the intricacies of family, the impact of culture and place, and the profound power of language.” —The San Diego Tribune

“One of the most delightful novels of the year.” —San Francisco Chronicle

“Surprises us with vivid, poetic language.” —The Philadelphia Inquirer

“Heartwarming . . . It is a pleasure to read about these high-spirited Caribbean women.” —San Antonio Express-News

“[Alvarez] enchants the reader while spinning her web of wonder.” —Richmond Times-Dispatch

“Exquisite . . . Alvarez makes magic and art of the human odyssey, finding wonder and faith amid the world’s confusion and ignorance.” —The Virginian-Pilot and Ledger-Star

“A kind of Dominican-American Little Women.” —The Raleigh News and Observer

“An impressive talent . . . A tragicomic voice whose accent is happily her very own.” —Fort Lauderdale Sun-Sentinel

“Alvarez’s prose is straightforward yet possesses an inner fire touched with poetry and a finely tuned sense of irony and quiet revelation.” —The Memphis Commercial Appeal

“An expertly witnessed and daringly constructed novel.” —The Tampa Tribune-Times

“The voices that reveal this world are honest, clear, and rich.” —Winston-Salem Journal

“Alvarez manages to bring to attention many of the issues—serious and light—that immigrant families face, portraying them with sensitivity and, at times, an enjoyable, mischievous sense.” —Kirkus Reviews

“This unique coming-of-age tale is a feast of stories that will enchant and captivate readers.” —School Library Journal