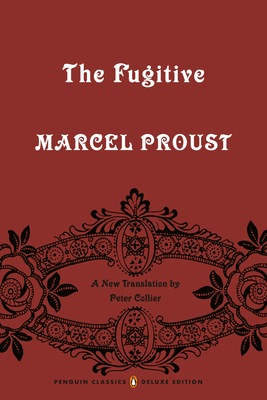 This is book number 6 in the In Search of Lost Time series.

The long-awaited penultimate volume--"the very summit of Proust's art" (Slate)--in the acclaimed Penguin translation of Marcel Proust's greatest work, in time for the 150th anniversary of his birth

"The greatest literary work of the twentieth century." --The New York Times

A Penguin Classics Deluxe Edition, with flaps and deckle-edged paper

Peter Collier's acclaimed translation of The Fugitive introduces a new generation of American readers to the literary riches of Marcel Proust. The sixth and penultimate volume in Penguin Classics' superb new edition of In Search of Lost Time--the first completely new translation of Proust's masterpiece since the 1920s--brings us a more comic and lucid prose than readers of English have previously been able to enjoy.

"Miss Albertine has left!" So begins The Fugitive, the second part of what is often referred to as "the Albertine cycle," or books five and six of In Search of Lost Time. As Marcel struggles to endure Albertine's departure and vanquish his loss, he ends up in an anguished search for the essential truth of the enigmatic fugitive, whose love affairs with other women provoke in him jealousy and a new understanding of sexuality. Eventually, he lets go of Albertine and begins to find himself, discovering his own long-lost inner sources of creativity.

For more than seventy-five years, Penguin has been the leading publisher of classic literature in the English-speaking world. With more than 2,000 titles, Penguin Classics represents a global bookshelf of the best works throughout history and across genres and disciplines. Readers trust the series to provide authoritative texts enhanced by introductions and notes by distinguished scholars and contemporary authors, as well as up-to-date translations by award-winning translators.

Marcel Proust (1871-1922) was born in Auteuil, France. In his early twenties, he was a conspicuous society figure, frequenting the most fashionable Paris salons of the day. After 1899, however, his chronic asthma, the death of his parents, and his growing disillusionment with humanity caused him to lead an increasingly retired life. From 1907 on, he rarely emerged from his apartment, where he devoted himself to the completion of In Search of Lost Time.

Peter Collier (translator) is a fellow of Sidney Sussex College and a former senior lecturer in French at the University of Cambridge. He has previously translated Pierre Bourdieu's Homo Academicus and Émile Zola's Germinal, and is the author of Proust and Venice.

Christopher Prendergast (general editor) is a professor emeritus of French literature at the University of Cambridge and a fellow of King's College.