The Sting Man: Inside ABSCAM (Paperback) 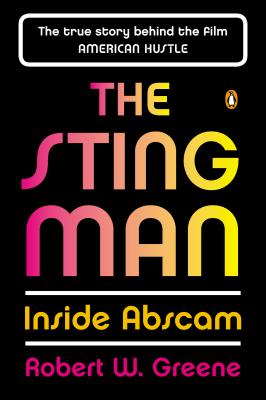 The terrific true story behind American Hustle! With the help of a con man par excellence, Greene unravels the 1970s bust that brought down a score of crooked Congressmen. A hilarious and colorful primer in the real art of the deal. — Charles Bottomley

The true story behind the film AMERICAN HUSTLE
"The Sting Man" is the amazing inside story of Mel Weinberg, one of the most fascinating fast-buck operators to ever live, and the incredible scandals he masterminded. Hustling his way from the streets of the Bronx to hawking bogus businesses around the world, Weinberg netted millions and famously dreamed up Abscam the infamous FBI-run sting operation of the late 1970's that would bag seven congressmen and one U.S. senator.

A veteran reporter of over twenty-seven years, Robert W. Greene was a Senior Staff Investigator for the New York City Anti-Crime Committee and an investigator for the U.S. Senate. As a reporter for "Newsday," he headed investigative teams that twice won the Pulitzer Prize gold medal. He was also president of the Investigative Reporters and Editors Group. He died in 2008.