A Working Theory of Love: A Novel (Paperback) 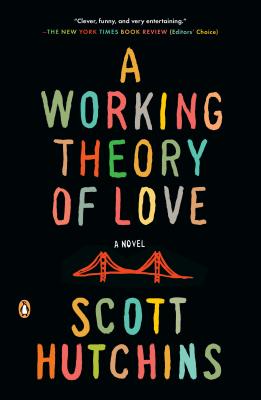 It's one thing to create an artificial intelligence program using your late dad's journals. It's quite another when "dad" starts talking back. Hutchins's immensely satisfying debut novel is a father-son story unlike any you've read before. — Charles Bottomley

Before his brief marriage imploded, Neill Bassett took a job feeding data into what could be the world’s first sentient computer. Only his attempt to give it language—through the journals his father left behind after committing suicide—has unexpected consequences. Amidst this turmoil, Neill meets Rachel, a naïve young woman escaping a troubled past, and finds himself unexpectedly drawn to her and the possibilities she holds. But as everything he thought about the past becomes uncertain, every move forward feels impossible.

Scott Hutchins is a Truman Capote fellow in the Wallace Stegner Program at Stanford University, where he currently teaches. He lives in San Francisco.

"The field of artificial intelligence, or computer robotics, may not sound like a poignant story line for a novel, particularly one that bends thematically toward the beatings of the heart. But Scott Hutchins, in A Working Theory of Love turns this potentially sterile technological world into an emotionally moving force that helps propel the narrative as it grapples with the stuff of real life... In quick, artful strokes, the various characters in a wide cast are memorably drawn and entwined in Neill's personal saga. Even the would-be intelligent machine, "Dr. Bassett," becomes such a vivid character that questions of its mortality, not just its human dimensions, are raised... A terrific debut, an intriguing, original take on family and friendship, lust and longing, grief and forgiveness."
—The Associated Press

"What makes a man? In this terrific debut novel, A Working Theory of Love, emotionally adrift divorcé Neill Bassett Jr. is trying to build the world's first sentient computer program. After inputting 20 years of his late father's diaries, he holds conversations with a pixelated personality that seems just like his dad—discussing his life, his childhood, and his current romantic woes. Throughout, Hutchins hits that sweet spot where humor and melancholy comfortably coexist."
—Entertainment Weekly

"[A] must-read debut novel. [A Working Theory of Love] is in some ways is a kind of Nick Hornby-ish take on Richard Powers' computer classic, Galatea 2.2... this novel thwarts the reader's expectations at every turn, blurring the line between man, memory, and machine."
—Details

“It takes a genius, a supercomputer, a disembodied voice and a man who’s stopped believing to create A Working Theory of Love. Original, wise, full of serious thinking, serious fun, and the shock of the new, this book is astonishing.”
—Adam Johnson, author of The Orphan Master’s Son