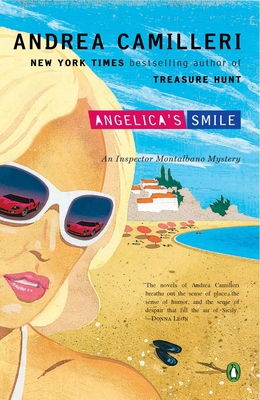 This is book number 17 in the An Inspector Montalbano Mystery series.

A rash of burglaries has got Salvo Montalbano stumped. The patterns of the crimes are so similar and so brazen that Montalbano begins to think a criminal mastermind is challenging him. This suspicion is confirmed when he starts receiving menacing letters from the gang leader, the anonymous Mr. Z.

Among those burgled is the young and beautiful Angelica Cosulich, who reminds Montalbano of the love interest in Ludovico Ariosto's chivalric romance, Orlando Furioso. Taken by Angelica's charms, he imagines himself back in the medieval world of jousts and battles. But when one of the burglars turns up dead, Montalbano must snap out of his haze and unmask his challenger.

Andrea Camilleri is the bestselling author of the popular Inspector Montalbano mystery series, as well as historical novels that take place in nineteenth-century Sicily. He lives in Rome.

Stephen Sartarelli (translator) is an award-winning translator and poet. He lives in France.

“Camilleri’s Inspector Montalbano mysteries might sell like hotcakes in Europe, but these world-weary crime stories were unknown here until the oversight was corrected (in Stephen Sartarelli’s salty translation) by the welcome publication of The Shape of Water…This savagely funny police procedural…prove[s] that sardonic laughter is a sound that translates ever so smoothly into English.”—The New York Times Book Review

“Wit and delicacy and the fast-cut timing of farce play across the surface…but what keeps it from frothing into mere intellectual charm is the persistent, often sexually bemused Montalbano, moving with ease along zigzags created for him, teasing out threads of discrepancy that unravel the whole.”—Houston Chronicle

“The Montalbano mysteries offer cose dolci to the world-lit lover hankering for a whodunit.”—The Village Voice

“In Sicily, where people do things as they please, Inspector Salvo Montalbano is a bona fide folk hero.”—The New York Times Book Review

“The books are full of sharp, precise characterizations and with subplots that make Montalbano endearingly human…Like the antipasti that Montalbano contentedly consumes, the stories are light and easily consumed, leaving one eager for the next course.”—New York Journal of Books

“The reading of these little gems is fast and fun every step of the way.”—The New York Sun

“This series is distinguished by Camilleri’s remarkable feel for tragicomedy, expertly mixing light and dark in the course of producing novels that are both comforting and disturbing.”—Booklist