Island of Bones: A Novel (A Westerman and Crowther Mystery #3) (Paperback) 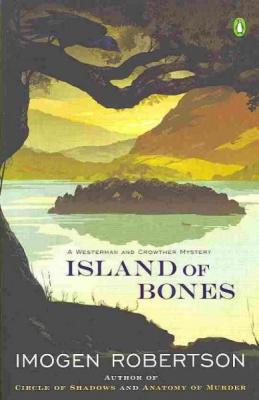 The newest Gabriel Crowther/Harriet Westerman mystery is brimming with intrigue and plot twists. A corpse is found in an ancient tomb on Crowther's family estate and it isn't one of the original occupants. The two embark on an investigation that will bring to light deeds Crowther has spent decades trying to forget. A nail-biting thrill of a read! — Sarah Donner

England, 1783. For years, reclusive anatomist Gabriel Crowther has pursued his forensic studies—and the occasional murder investigation—far from his family estate. But an ancient tomb there will reveal a wealth of secrets. When laborers discover an extra body inside the tomb, the lure of the mystery brings Crowther home at last, accompanied by his partner in crime, the forthright Mrs. Harriet Westerman. What Crowther learns will rewrite his family’s past—and spill new blood in a land torn between old magic and modern justice.

The next installment in a series described as “CSI: Georgian England” (The New York Times Book Review), Island of Bones is a riveting tale that will captivate fans of Jacqueline Winspear and Charles Finch.

Imogen Robertson worked as a television, film, and radio director before becoming a full-time writer. She is the author of four Westerman/Crowther novels: Instruments of Darkness; Anatomy of Murder; Island of Bones, which was short-listed for the 2011 Crime Writers’ Association Ellis Peters Historical Award; and forthcoming from Pamela Dorman Books, Circle of Shadows. In 2012 she was shortlisted for the CWA Dagger in the Library. She lives in London.

Praise for Island of Bones:

“Robertson's superior third historical featuring anatomist Gabriel Crowther and widow Harriet Westerman (after 2012's Anatomy of Murder) makes the most of its revelations about Crowther's backstory . . . First-rate prose and the deepening relationship between the two leads bode well for the longevity of this series.”
—Publishers Weekly (starred review)

“[An] audacious mix of cultural gloss and uncomplicated, straight-ahead storytelling. The multi-layered nuance of Peter Ackroyd and the buttonholing narrative grasp of Stephen King are stirred into the mix.”

"A new Imogen Robertson book is fast becoming something of an event. ...this follow-up does not disappoint.  As ever, the characters are enticing and the plot absorbing. If you've not read the previous books, do not despair--they each stand alone. But if you have time on your hands, now is your chance to catch up."
—The Daily Mail (UK)

Praise for Anatomy of Murder:

“Memorable prose, strong and unusual leads, a sophisticated plot with several unexpected turns, and an accurate portrayal of the period all make this a winner.”
—Publishers Weekly (starred review)

"Robertson's language is spry . . . her scene-setting broad and detailed, her prose gracefully pressed into the service of a serpentine plot."
—Financial Times (UK)

“In the overcrowded field of historical fiction, Robertson has the smarts comfortably to outpace most of her rivals.”

Praise for Instruments of Darkness:

“A sensitive melodrama. . . . Robertson’s enjoyment of the period and her characters is infectious.”

“A thoroughly engaging novel, with rich prose and an intricate, suspenseful plot, with melodramatic, Gothic touches in perfect keeping with the historical period. Robertson has already written another Westerman/Crowther mystery. . . . let us hope for many more.”

“Every so often I encounter a book that makes me think with envy: ‘How I wish I could have written this story!’ Instruments of Darkness is just that book—poetic, enchanting, and chillingly memorable. Imogen Robertson is an exquisite writer, and this is an extraordinary novel.”

“Mayhem runs amok in this period thriller. [Robertson] pulls out all the stops. . . a roaring soap opera of a novel.”

“Impressive . . . A ripping homage to Dickens, Austen and Conan Doyle, Instruments of Darkness will keep you up at night, and then, like me, waiting for the sequel.”

“The book works splendidly as a period thriller, with complicated leads and informative details that illuminate 18th-century England for modern readers.”

“This debut is getting some play and should well serve lovers of historical suspense.”