Call for the Dead: A George Smiley Novel (Paperback) 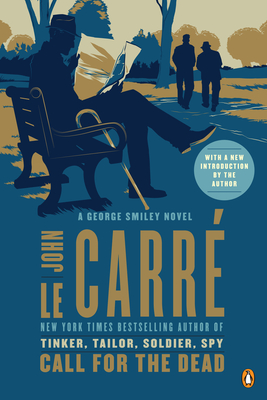 The first of his peerless novels of Cold War espionage and international intrigue, Call for the Dead is also the debut of John le Carré's masterful creation George Smiley.

"Go back to Whitehall and look for more spies on your drawing boards."

George Smiley is no one's idea of a spy—which is perhaps why he's such a natural. But Smiley apparently made a mistake. After a routine security interview, he concluded that the affable Samuel Fennan had nothing to hide. Why, then, did the man from the Foreign Office shoot himself in the head only hours later? Or did he?

The heart-stopping tale of intrigue that launched both novelist and spy, Call for the Dead is an essential introduction to le Carré's chillingly amoral universe.

“A subtle and acute story of counterespionage marked by restraint, indirection, and intelligence.”
—The New York Times Book Review

"[Le Carré] is one of our great writers of moral ambiguity, a tireless explorer of that darkly contradictory no-man's-land."
—Los Angeles Times

"An extraordinary writer who brought literary lustre and lived insight to the spy yarn." -- Ian Rankin

"One of those writers who will be read a century from now." -- Robert Harris

"His Smiley novels are key to understanding the mid-20th century." -- Margaret Atwood

"What Joseph Conrad started, John le Carré enshrined and made modern. That is the real achievement of his great novels and why they will endure ... we should see him as our contemporary Dickens." -- William Boyd ― New Statesman (London)