A Man of Parts (Paperback) 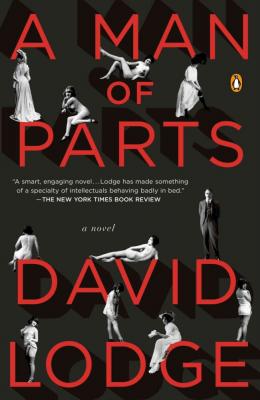 A brilliant novel that brings to life the good and terrible of this multifaceted man, often in his own word - his enormous, wide ranging literary output; his advocacy of labor rights and women’s suffrage; his extremely active sex life – and his era. — Louise Jones

A riveting novel about the remarkable life and many loves of author H. G. Wells

H. G. Wells, author of The Time Machine and War of the Worlds, was one of the twentieth century's most prophetic and creative writers, a man who immersed himself in socialist politics and free love, whose meteoric rise to fame brought him into contact with the most important literary, intellectual, and political figures of his time, but who in later years felt increasingly ignored and disillusioned in his own utopian visions. Novelist and critic David Lodge has taken the compelling true story of Wells's life and transformed it into a witty and deeply moving narrative about a fascinating yet flawed man.

Wells had sexual relations with innumerable women in his lifetime, but in 1944, as he finds himself dying, he returns to the memories of a select group of wives and mistresses, including the brilliant young student Amber Reeves and the gifted writer Rebecca West. As he reviews his professional, political, and romantic successes and failures, it is through his memories of these women that he comes to understand himself. Eloquent, sexy, and tender, the novel is an artfully composed portrait of Wells's astonishing life, with vivid glimpses of its turbulent historical background, by one of England's most respected and popular writers.

David Lodge is the author of twelve novels and a novella, including the Booker Prize finalists Small World and Nice Work. He is also the author of many works of literary criticism, including The Art of Fiction and Consciousness and the Novel.

"This novel is as scintillating, engaging, and multidimensional as the man whose life and character it faithfully animates . . . Lodge neatly shifts between narrative and probing interview, to reveal the intersections of writer, thinker, and man . . . Ultimately, this novel's sensitive and lively examination of its protagonist's relationships with women is what really fleshes out (so to speak) his attractive character."
-Christina Schwarz, The Atlantic

"A terrifically enjoyable novel . . . A Man of Parts explores, with great verve, Wells's lifelong attempt to honor his own complexity, to be true to himself as a sexual being, a loving family man, a creative artist and an ambitious social thinker . . . Even if you're up on Wells's life and writings, Lodge makes his novel-cum-biography mesmerizing."
-Michael Dirda, The Washington Post

"[A] smart, engaging novel . . . Lodge has made something of a specialty of intellectuals behaving badly in bed."
-Christopher Benfey, The New York Times Book Review

"Entertaining and persuasive . . . A Man of Parts allows Lodge to concentrate on comedy and character . . . [his] interest is in the private rather than the public Wells."
-Claire Tomalin, The New York Review of Books