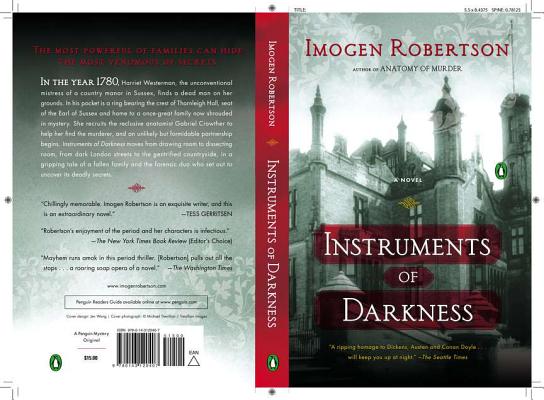 This page turner set in 1780 has plenty of twists and turns, murders and shady characters. The first in what is sure to be a nail-biting series. I loved this book! — Sarah Donner

“Shades of Jane Eyre meets Sherlock Holmes, circa 1776: two murders near a country manor in West Sussex; a Lord accused; and insanity, fire, orphans. Attempting to solve the mystery are an early forensic doctor, Gabriel Crowther, and his neighbor, Mrs. Westerman, the unconventional mistress of Caveley Park. This is the first in what I hope will be a long series featuring two fabulously appealing detectives.”
— Karen Corvello, R.J. Julia Booksellers, Madison, CT

The first novel in the Westerman and Crowther historical crime series that The New York Times Book Review called CSI: Georgian England and Tess Gerritsen called chillingly memorable
Debut novelist Imogen Robertson won the London Telegraph's First Thousand Words of a Novel competition in 2007 with the opening of Instruments of Darkness. The finished work is a fast-paced historical mystery starring a pair of amateur eighteenth-century sleuths with razor-sharp minds. When Harriet Westerman, the unconventional mistress of a Sussex manor, finds a dead man on her grounds, she enlists reclusive anatomist Gabriel Crowther to help her find the murderer. Moving from drawing room to dissecting room, from dark London streets to the gentrified countryside, Instruments of Darkness is a gripping tale of the forbidding Thornleigh Hall and an unlikely forensic duo determined to uncover its deadly secrets.

Imogen Robertson studied Russian and German at Cambridge University and has worked as a TV, film, and radio director. In 2007, she won "The Telegraph's" First Thousand Words of a Novel competition with what would become "Instruments of Darkness." She currently lives in London and has finished a second novel about Harriet Westerman and Gabriel Crowther entitled "Anatomy of Murder."

Praise for INSTRUMENTS OF DARKNESS:

“Every so often I encounter a book that makes me think with envy: ‘How I wish I could have written this story!’ Instruments of Darkness is just that book—poetic, enchanting, and chillingly memorable. Imogen Robertson is an exquisite writer, and this is an extraordinary novel.”
—Tess Gerritsen, bestselling author of Last to Die

“Mayhem runs amok in this period thriller. [Robertson] pulls out all the stops . . . [a] roaring soap opera of a novel.”
—The Washington Times

“Impressive . . . Robertson has a wicked way with suspense. A ripping homage to Dickens, Austen, and Conan Doyle, Instruments of Darkness will keep you up at night, and then, like me, waiting for the sequel.”
—Seattle Times