Playing the Enemy: Nelson Mandela and the Game That Made a Nation (Paperback) 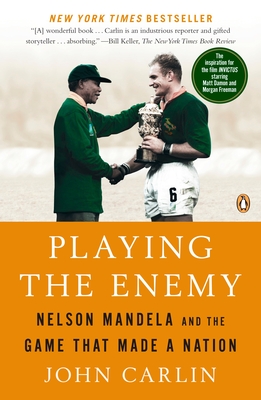 Beginning in a jail cell and ending in a rugby tournament- the true story of how the most inspiring charm offensive in history brought South Africa together. After being released from prison and winning South Africa's first free election, Nelson Mandela presided over a country still deeply divided by fifty years of apartheid. His plan was ambitious if not far-fetched: use the national rugby team, the Springboks-long an embodiment of white-supremacist rule-to embody and engage a new South Africa as they prepared to host the 1995 World Cup. The string of wins that followed not only defied the odds, but capped Mandela's miraculous effort to bring South Africans together again in a hard-won, enduring bond.

John Carlin is senior international writer for El País, the world’sleading Spanish language newspaper, and was previously the U.S.bureau chief for The Independent on Sunday. His writing has appeared inThe New York Times, The New Republic, Wired, Spin, and Conde NastTraveler.

"If you have any doubts about the political genius of Nelson Mandela, read John Carlin's engrossing book . . . [A] feel-good slice of history." —USA Today