The Likeness: A Novel (Paperback) 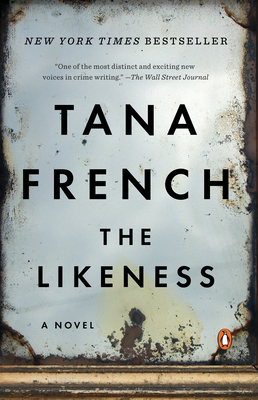 By Tana French
$17.00
Click Title for IN STOCK Location

My favorite of the series! Dark, slow, incredibly suspenseful. When Detective Cassie Maddox is called to the scene of a murder, she discovers the victim looks exactly like her and is carrying the ID of an alias she once used. Cassie assumes the victim’s life, taking her place amongst a group of mysterious friends who appear peaceful and academic, but could be harboring the truth. — Amelia Stymacks

Detective Cassie Maddox who was in French's first mystery, In the Woods, is cajoled into impersonating a dead woman when she's a "dead ringer" for her. Maddox finds out why the woman was murdered and more importantly, which of her housemates is the killer. Very good, suspenseful, a well-written mystery.

My favorite of French’s Dublin Murder Squad series. It is modeled after Donna Tartt’s The Secret History. The murder occurs among an inseparable clique of well-read college students living together in a large, old house, but it flips Tartt’s whydunnit concept back to the genre’s traditional whodunnit format. This novel requires a simple leap in believability: that the detective assigned to investigate this murder is a near doppelganger of the victim. Well-paced, thoroughly tense, and more fun than its inspiration.

“Cassie Maddox is a former undercover detective working in domestic violence when she is called to the scene of a murder of a girl who bears an uncanny resemblance to Cassie herself. Stranger still, the victim's name is apparently Lexie Madison, an identity fabricated by Cassie years ago. As layers of secrets are revealed, this memerizing novel will keep the reader riveted.”
— Tova Beiser, Brown University Bookstore, Providence, RI

“Cassie Maddox is a former undercover detective working in domestic violence when she is called to the scene of a murder of a girl who bears an uncanny resemblance to Cassie herself. Stranger still, the victim's name is apparently Lexie Madison, an identity fabricated by Cassie years ago. As layers of secrets are revealed, this mesmerizing novel will keep the reader riveted!”
— Tova Beiser, Brown University Bookstore, Providence, RI

New York Times bestselling author Tana French, author of the forthcoming novel The Searcher, is “the most important crime novelist to emerge in the past 10 years” (The Washington Post) and “inspires cultic devotion in readers” (The New Yorker).

“Required reading for anyone who appreciates tough, unflinching intelligence and ingenious plotting.” —The New York Times

Now airing as a Starz series.

In the “compellingˮ (The Boston Globe) and “pitch perfectˮ (Entertainment Weekly) follow-up to Tana French’s runaway bestseller In the Woods, Cassie Maddox has transferred out of the Dublin Murder Squad—until an urgent telephone call brings her back to an eerie crime scene.

The victim looks exactly like Cassie and carries ID identifying herself as Alexandra Madison, an alias Cassie once used as an undercover cop. Suddenly, Cassie is back undercover, to find out not only who killed this young woman, but, more importantly, who she was.

The Likeness is a supremely suspenseful story exploring the nature of identity and belonging.

Tana French is also the author of In the Woods, The Likeness, Faithful Place, Broken Harbor, The Secret Place, and The Trespasser. Her books have won awards including the Edgar, Anthony, Macavity, and Barry awards, the Los Angeles Times Award for Best Mystery/Thriller, and the Irish Book Award for Crime Fiction. She lives in Dublin with her family.

“[Tana French] aces her second novel. The Likeness [is a] nearly pitch-perfect follow-up to her 2007 debut thriller, In the Woods.”
--Entertainment Weekly**

“Tana French puts a clever twist on every lonely child’s fantasy of leading a parallel life when she creates an alternate identity for her detective in THE LIKENESS... Cassie is a character — the eternal lost child — you can really care about.”
--New York Times Book Review

“The writing is glorious, and the characters and drama so compelling”
--The Boston Globe*

“Savor French’s turns of phrase and simmering suspense until the prospect of finishing shuts all distractions out.”
--The Baltimore Sun

“The verve of her writing illuminates the uncanny experience of stepping into someone else’s life. [The Likeness is] a sophisticated thriller.”
--The Dallas Morning News

“When you read Ms. French — and she has become required reading for anyone who appreciates tough, unflinching intelligence and ingenious plotting — make only one assumption: All of your initial assumptions are wrong”
—The New York Times

"Tana French is the most interesting, most important crime novelist to emerge in the past 10 years."
—The Washington Post

“To say Tana French is one of the great thriller writers is really too limiting. Rather she’s simply this: a truly great writer.”­
—Gillian Flynn

“French is a poet of mood and a master builder of plots.” ­
—The Washington Post

“One of the most distinct and exciting new voices in crime writing.”
—The Wall Street Journal

“French does something fresh with every novel, each one as powerful as the last but in a very different manner. Perhaps she has superpowers of her own? Whatever the source of her gift, it’s only growing more miraculous with every book.”
—Salon.com