Crusaders: The Epic History of the Wars for the Holy Lands (Paperback) 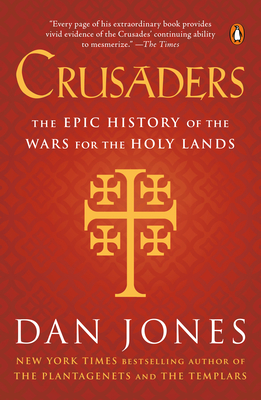 The depth and cultural detail in the Crusaders is intense, starting with the visceral telling of recruiting of holy soldiers, happily leaving families and homes to stitch a cross on their chests and march to war for God and glory. You'll get a ground level view of lords, armies and battles that led to the capture, and loss of Jerusalem. You'll need a scorecard to keep track -- and a strong stomach at times. — Chris Hardaway

A major new history of the Crusades with an unprecedented wide scope, told in a tableau of portraits of people on all sides of the wars, from the author of Powers and Thrones.

For more than one thousand years, Christians and Muslims lived side by side, sometimes at peace and sometimes at war. When Christian armies seized Jerusalem in 1099, they began the most notorious period of conflict between the two religions. Depending on who you ask, the fall of the holy city was either an inspiring legend or the greatest of horrors. In Crusaders, Dan Jones interrogates the many sides of the larger story, charting a deeply human and avowedly pluralist path through the crusading era.

Expanding the usual timeframe, Jones looks to the roots of Christian-Muslim relations in the eighth century and tracks the influence of crusading to present day. He widens the geographical focus to far-flung regions home to so-called enemies of the Church, including Spain, North Africa, southern France, and the Baltic states. By telling intimate stories of individual journeys, Jones illuminates these centuries of war not only from the perspective of popes and kings, but from Arab-Sicilian poets, Byzantine princesses, Sunni scholars, Shi'ite viziers, Mamluk slave soldiers, Mongol chieftains, and barefoot friars.

Crusading remains a rallying call to this day, but its role in the popular imagination ignores the cooperation and complicated coexistence that were just as much a feature of the period as warfare. The age-old relationships between faith, conquest, wealth, power, and trade meant that crusading was not only about fighting for the glory of God, but also, among other earthly reasons, about gold. In this richly dramatic narrative that gives voice to sources usually pushed to the margins, Dan Jones has written an authoritative survey of the holy wars with global scope and human focus.

Dan Jones is the New York Times bestselling author of The Templars, The Plantagenets, Wars of the Roses, and Magna Carta. He wrote and presented the popular Netflix series Secrets of Great British Castles and appeared alongside George R.R. Martin in the official HBO film exploring the real history behind Game of Thrones.

"Jones’s writing aims at a you-are-there effect . . . The immediacy of [his] book is enhanced by physical and psychological descriptions of the heroes and villains of the story . . . Some of Jones’s primary sources are little known, and even enthusiasts for the subject may never have heard of the Russian Daniel the Abbot, Saint Neophytos the Recluse, or La Chronique de Morigny."—The New York Review of Books

"Every page of [Dan Jones'] extraordinary book provides vivid evidence of the Crusades’ continuing ability to mesmerise...Amid the juicy anecdotes, the great strength of this book is the way in which it illuminates the human networks that underpinned the Crusades."—The Times (UK)

“Jones’ sweeping coverage of a conflict of three centuries’ duration hews to the highest standards of popular history. It is literate, thoroughly engaging, and serious, without condescension towards either its matter or its readers.”—Booklist (*starred*)

“Jones paints a vivid and accurate picture of the culture, politics, and personalities of the crusading period, covering vast swaths of history and many personalities with aplomb."—Publishers Weekly

“Dan Jones, author of The Templars, returns to dazzle readers with a fascinating look at the Crusades. And lest you hesitate because events that took place a thousand years ago appear irrelevant, rest assured: This is no dry, boring tome . . . Like Game of Thrones, this epic tale is peopled with a large cast . . . In a thought-provoking epilogue, Jones brings his narrative into the present day.”—BookPage

“Dan Jones brings to life a tremendous cast of characters from every arena of the crusading world, from the eastern Mediterranean to southern Spain, and from Byzantium to the Baltic. Coupling vivid storytelling with a researcher's eye for the telling anecdote, Jones offers a fresh and vibrant – but meticulously constructed – account of a conflict that raged across the medieval centuries, and whose echoes continue to resonate to the present day.”—Jonathan Phillips, author of The Life and The Legend of The Sultan Saladin and Holy Warriors

“A powerful story brilliantly told. Dan Jones writes with pace, wit and insight, a panoramic gaze and unfailing humanity. The result is utterly compelling.”—Helen Castor, author of She-Wolves and Joan of Arc

“The centuries of campaigning to reclaim the Holy Land retain their fascination, as demonstrated by this expert mixture of cutthroat politics, battlefield fireworks, and mass murder . . . As usual, the author has done his homework, laboring mightily to recount century after century of gruesome warfare between profoundly religious cultures with apparently no inhibition against lying and profound cruelty . . . [Readers] will keep the pages turning.”—Kirkus Reviews

“The author’s choice to make the people doing the action rather than the act as the focus is insightful...An entertaining and informative look at a potent historical phenomenon whose echoes are still being felt today.”—Library Journal (*starred*)


Praise for The Templars:

"Dan Jones is an entertainer, but also a bona fide historian. Seldom does one find serious scholarship so easy to read." --The Times, Book of the Year

"Dan Jones gives no credence to the conspiratorial fantasies that have been spun around the Templars over the years . . . His aim is to present a gripping historical narrative, and in this he succeeds." --Cullen Murphy, The Washington Post

"Dan Jones has created a gripping page-turner out of the dramatic history of the Templars, from their spiritual warrior beginnings until their tragic destruction by the French king and the pope. It is genuinely moving and a chilling contemporary warning about the abuse of power through persecution and lies."-- Philippa Gregory, author of The White Queen

"Jones' fast-paced history is laced with tales of blood and bravery, disaster and victory. . . . Drawing on Christian and Muslim sources, he carries the Templars through the crusades with clarity and verve. This is unabashed narrative history, fast-paced and full of incident." --The Sunday Times

Praise for The Plantagenets:

"A real life Game of Thrones, as dramatic and blood-soaked as any work of fantasy . . . Fast-paced and accessible, The Plantagenets is old-fashioned storytelling and will be particularly appreciated by those who like their history red in tooth and claw." --The Wall Street Journal

"The Plantagenets is rich in detail and scene-setting...The Plantagenets' saga is the story of how English monarchs learned, or failed to learn, how to be kings, and how the English people, commoners and barons alike, learned how to limit their powers."--USA Today