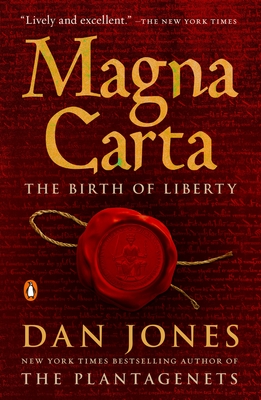 This is a succinct, action packed history of the tumultuous year 1215. King John (Lackland), a whole host of good and bad guys, and lots of battles and events are all contributing factors in the creation of the Magna Carta. Jones examines why this single document is so important and has such an enduring legacy.

"Dan Jones has an enviable gift for telling a dramatic story while at the same time inviting us to consider serious topics like liberty and the seeds of representative government." —Antonia Fraser

From the New York Times bestselling author of The Plantagenets, a lively, action-packed history of how the Magna Carta came to be—by the author of Crusaders.

The Magna Carta is revered around the world as the founding document of Western liberty. Its principles—even its language—can be found in our Bill of Rights and in the Constitution. But what was this strange document and how did it gain such legendary status?

Dan Jones takes us back to the turbulent year of 1215, when, beset by foreign crises and cornered by a growing domestic rebellion, King John reluctantly agreed to fix his seal to a document that would change the course of history. At the time of its creation the Magna Carta was just a peace treaty drafted by a group of rebel barons who were tired of the king's high taxes, arbitrary justice, and endless foreign wars. The fragile peace it established would last only two months, but its principles have reverberated over the centuries.

Jones's riveting narrative follows the story of the Magna Carta's creation, its failure, and the war that subsequently engulfed England, and charts the high points in its unexpected afterlife. Reissued by King John's successors it protected the Church, banned unlawful imprisonment, and set limits to the exercise of royal power. It established the principle that taxation must be tied to representation and paved the way for the creation of Parliament.

In 1776 American patriots, inspired by that long-ago defiance, dared to pick up arms against another English king and to demand even more far-reaching rights. We think of the Declaration of Independence as our founding document but those who drafted it had their eye on the Magna Carta.

Dan Jones is the author of The Plantagenets: The Warrior Kings and Queen Who Made England, a #1 international bestseller and New York Times bestseller, and Wars of the Roses, which charts the story of the fall of the Plantagenet dynasty and the improbable rise of the Tudors. He writes and presents the popular Netflix series Secrets of Great British Castles and appeared alongside George R.R. Martin in the official HBO film exploring the real history behind Game of Thrones. He was closely involved in the British Library’s landmark unification of the four remaining original copies of the Magna Carta to mark the charter’s eight hundredth anniversary. He is also the author of Summer of Blood: England’s First Revolution and is currently working on a history of the Knights Templar due out in September 2017.

"By putting the Magna Carta in its proper historical context, the brilliant young historian Dan Jones triumphantly answers the questions he poses in his Introduction, about how it came to be granted, what it meant at the time, and what it should mean to us today."
—Andrew Roberts, New York Times bestselling author of Napoleon

"Excellent and very well-crafted."
—The New York Review of Books

"Dan Jones has an enviable gift for telling a dramatic story while at the same time inviting us to consider serious topics like liberty and the seeds of representative government."
—Antonia Frasier

"Lively and clear-eyed."
—The London Review of Books

"An insightful, satisfying history of a beloved. . . icon of freedom."
—Kirkus Reviews

Praise for The Wars of the Roses

"Tautly structured, elegantly written, and finely attuned to the values and sensibilities of the age . . . The best introduction to the conflict currently in print."
—The Mail On Sunday

“Jones is a born storyteller, peopling the terrifying uncertainties of each moment with a superbly drawn cast of characters and powerfully evoking the brutal realities of civil war. With gripping urgency he shows this calamitous conflict unfold.”
—The Evening Standard

"Edifying and utterly entertaining. . . Jones tells a good story . . . His delightful wit is as ferocious as the dreadful violence he describes.
—The Times (London)

Praise for The Plantagenets

“A real life Game of Thrones, As dramatic and blood-soaked as any work of fantasy. Like the medieval chroniclers he quarries for juicy anecdotes, Jones has opted for a bold narrative approach anchored firmly upon the personalities of the monarchs themselves yet deftly marshaling a vast supporting cast of counts, dukes, and bishops. . . . Fast-paced and accessible, The Plantagenets is old-fashioned storytelling and will be particularly appreciated by those who like their history red in tooth and claw. Jones tackles his subject with obvious relish."
--The Wall Street Journal

“Outstanding. Majestic in its sweep, compelling in its storytelling, this is narrative history at its best. A thrilling dynastic history of royal intrigues, violent skullduggery, and brutal warfare across two centuries of British history.”
—Simon Sebag Montefiore, bestselling author of Jerusalem: The Biography

“Jones has brought the Plantagenets out of the shadows, revealing them in all their epic heroism and depravity. His is an engaging and readable account—itself an accomplishment given the gaps in medieval sources and a 300-year tableau—and yet researched with the exacting standards of an academician. The result is an enjoyable, often harrowing journey through a bloody, insecure era in which many of the underpinnings of English kingship and ­Anglo-American constitutional thinking were formed."
—The Washington Post

“Some of the greatest stories in all of English history . . . rich in pageantry and soaked in blood.”
—Lewis Lapham

“Jones has written a magnificently rich and glittering medieval pageant, guiding us into the distant world of the Plantagenets with confidence. This riveting history of an all-too-human ruling House amply confirms the arrival of a formidably gifted historian.”
—Sunday Telegraph