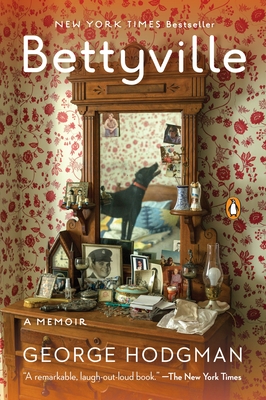 “The idea of a cultured gay man leaving New York City to care for his aging mother in Paris, Missouri, is already funny, and George Hodgman reaps that humor with great charm. But then he plunges deep, examining the warm yet fraught relationship between mother and son with profound insight and understanding.” —Alison Bechdel, author of Fun Home

When George Hodgman leaves Manhattan for his hometown of Paris, Missouri, he finds himself—an unlikely caretaker and near-lethal cook—in a head-on collision with his aging mother, Betty, a woman of wit and will. Will George lure her into assisted living? When hell freezes over. He can’t bring himself to force her from the home both treasure—the place where his father’s voice lingers, the scene of shared jokes, skirmishes, and, behind the dusty antiques, a rarely acknowledged conflict: Betty, who speaks her mind but cannot quite reveal her heart, has never really accepted the fact that her son is gay.

As these two unforgettable characters try to bring their different worlds together, Hodgman reveals the challenges of Betty’s life and his own struggle for self-respect, moving readers from their small town—crumbling but still colorful—to the star-studded corridors of Vanity Fair. Evocative of The End of Your Life Book Club and The Tender Bar, Hodgman’s New York Times bestselling debut is both an indelible portrait of a family and an exquisitely told tale of a prodigal son’s return.

“A remarkable, laugh-out-loud book . . . Rarely has the subject of elder care produced such droll human comedy, or a heroine quite on the mettlesome order of Betty Baker Hodgman. For as much as the book works on several levels (as a meditation on belonging, as a story of growing up gay and the psychic cost of silence, as metaphor for recovery), it is the strong-willed Betty who shines through.” —The New York Times

George Hodgman is a veteran magazine and book editor who has worked at Simon & Schuster, Vanity Fair, and Talk magazine. His writing has appeared in Entertainment Weekly, Interview, W, and Harper’s Bazaar, among other publications. He lives in New York City and Paris, Missouri.

“A remarkable, laugh-out-loud book . . . Rarely has the subject of elder care produced such droll human comedy, or a heroine quite on the mettlesome order of Betty Baker Hodgman. For as much as the book works on several levels (as a meditation on belonging, as a story of growing up gay and the psychic cost of silence, as metaphor for recovery), it is the strong-willed Betty who shines through.”
—The New York Times

“A lovely memoir . . .You won’t finish this tale dry-eyed.”
—People, Book of the Week

“A gorgeously constructed memoir . . . Hodgman creates an unforgettable portrait of his mother, Betty—a strong-willed nonagenarian struggling against the slow-motion breakdown of her mind and body. He evokes her with wit and tenderness.”
—The New York Times Book Review

“Without a doubt my favorite book of the year. Wise, witty, and heartbreaking . . . a surprisingly profound and hilarious look at aging, mothers and sons, fathers and sons, growing up gay and small-town life in America.”
—Nathan Lane, “Who Read What: Books of the Year 2015,” The Wall Street Journal

“Hodgman has written what will be seen, even years from now, as the quintessential book on taking care. . . . His desire to empathize, his focus on goodness, his search for hope allow him to find the beauty in the hour of now.”
—Chicago Tribune

“An intimate, heartfelt portrait of a mother and son, each at the crossroads of life . . . Hodgman’s sharp wit carries the book ever forward.”
—Minneapolis Star-Tribune

“A superb memoir . . . Hodgman is by turns wry, laugh-out-loud funny, self-deprecating, insecure to the point of near suicide, and an attentive caregiver despite occasional, understandable resentments. . . . I have read several hundred American memoirs; I would place Bettyville in the top five.”
—Steve Weinberg, Kansas City Star

“In his tender, sardonic, and fearless account of life with Betty—who has never acknowledged that her son is gay—Hodgman delivers an epic unfolding of his lifelong search for acceptance and love.”
—The Atlanta Journal-Constitution

“Hodgman paints a witty and poignant portrait of a son and his mother reconciling their differences and learning, among other things, how to cook, come to grips with caretaking, understand unspoken sexuality, and treat each other with patience, love, and self-respect. Surely we all have a beautifully complex and hilarious (if not semi-dysfunctional) relationships with our mothers, but none of us are likely to commemorate it with the skill and humor of Hodgman.”
—Los Angeles Magazine

“An exquisitely written memoir about the complicated but deeply genuine love a son feels for his courageous, headstrong, vulnerable mother in the twilight of her life. George Hodgman is stunningly clear-eyed and yet so darned big-hearted. Bettyville is just wonderful.”
—Jeannette Walls, author of The Glass Castle

“The idea of a cultured gay man leaving New York City to care for his aging mother in Paris, Missouri, is already funny, and George Hodgman reaps that humor with great charm. But then he plunges deep, examining the warm yet fraught relationship between mother and son with profound insight and understanding. This book looks outside, too, offering a moving lament for small-town America. Hodgman tenderly evokes the time before family farms and small businesses were replaced by meth labs and Walmarts. Yet he’s not sentimental about that lost world—he knew its cruelties firsthand. As George and his mother come to terms with one another at the end of her days, the book begins to shimmer with something much more rare than love: a boundless, transcendent, and simple kindness. Bettyville is a beautiful book about the strange plenitude that comes from finally letting go of everything.”
—Alison Bechdel, author of Fun Home

“Bettyville is a beautifully crafted memoir, rich with humor and wisdom. George Hodgman has created an unforgettable book about mothers and sons, and about the challenges that come with growing older and growing up.”
—Will Schwalbe, author of The End of Your Life Book Club

“This is a superior memoir, written in a witty and episodic style, yet at times it’s heartbreaking . . . filled with a lifetime’s worth of reflection and story after fascinating story.”
—Library Journal (starred review)

“Hodgman writes with wit and empathy about all the loss he’s confronted with. Betty’s poor health is mirrored by the fail­ure of towns like Paris, whose farms and lumberyards are now Walmarts and meth labs. Coming out in the age of AIDS, he lost the people he was close to when he had nowhere else to turn. . . . That doesn’t mean Bettyville is without humor—far from it. Paris eccentrics (one woman shampoos her hair in the soda fountain) com­pete with Hodgman’s colleagues in the office of Vanity Fair. . . . This is a portrait of a woman in decline, but still very much alive and committed to getting the lion’s share of mini-Snickers at every op­portunity. When things are left un­said between parents and children, it leaves a hurt that can never be completely repaired, but love and dedication can make those scarred places into works of art. Bettyville is one such masterpiece.”
—BookPage

“The book is instantly engaging, as Hodgman has a wry sense of humor, one he uses to keep others at a distance. Yet the book is also devastatingly touching. Betty is one tough cookie, and she is crumbling. Hodgman as a young man came out around the same time AIDS did, complicating his already complicated feelings immeasurably. There’s a lot for Hodgman to handle, yet he does, despite the urge to give in to his own sadness and his own former drug addiction. A tender, resolute look at a place, literal and figurative, baby boomers might find themselves.”
—Booklist

“Bettyville is a gorgeous memoir. I was completely engaged, not just because of George Hodgman’s great ear and his sense of timing, but because he delivers Betty to us in such a manner that she steps off the page . I felt transported to a better place, to a time period and a web of relationships with which we can all identify,  no matter where we grew up. Beyond the humor and the pathos, the quotidian and the bizarre, there remain profound lessons about life and love that I will carry away.”
—Abraham Verghese, author of Cutting for Stone

“George Hodgman achieves something stunning with this book—by paying such deep, loving attention to his mother’s (admittedly colorful) life, he offers us the chance to pay close attention to our own strange and beautiful Bettyvilles, which in the end is all we can ask of any art. This bejeweled pillbox is rich and funny and heartwrenching and might just you cure you of your ills; if those ills include loneliness or feeling like you don’t belong—you are not alone.”
—Nick Flynn, author of Another Bullshit Night in Suck City

“One of the great benefits of reading memoir is that it offers the reader more people to love. I love Betty, and I love George Hodgman, whose beautiful book this is. Read Bettyville. Laugh, weep, and be grateful.”
—Abigail Thomas, author of A Three Dog Life

“Bettyville reminded me of some Homeric legend, complete with treacherous chimeras and ravenous gorgons, except that it is told with such grace, wit, and spirited generosity that you hardly sense you are on a fragile bark, adrift on a perilous sea. This story of a sensitive Midwestern boy coming to terms with his homosexuality, his drug addiction, his clueless parents, his all-out war with shame, is nothing short of epic. It begins as a simple trip home from fast-track Manhattan to Paris, Missouri, to care for a failing mother, but by the time we are through, we have descended to an underworld, witnessed a plague, traveled all nine circles of hell, and emerged exhilarated by the grit and valor of our remarkable guide. It is, in every sense, a tale about the power of love.”
—Marie Arana, author of American Chica

“With great tenderness, honesty, and a searing, sardonic humor, George Hodgman has written a love letter to his mother, at once a penance and a tribute.  In doing so, he has given us Betty, a character for the ages. This is a beautiful, illuminating book.”
—Dani Shapiro, author of Devotion

“When I read the first few pages of Bettyville, I immediately connected. The detail is poetry and, yes, George Hodgman tells a story that is all our stories if we grow up different, struggling not to hurt those we treasure. But what I will most remember is the human struggle of Betty—the woman at the window, the woman at the piano, the woman whose desire to help others represents the best of small-town America. The silence she was taught and the complications of our parents’ journeys to be there for us, as best they could, is what I will take away from Bettyville, where she will always reside. Hers is the quiet love that outlasts the distances and lets us survive.”
—Richard Blanco, United States inaugural poet, author of The Prince of los Cucuyos: A Miami Childhood