A Little Larger Than the Entire Universe: Selected Poems (Paperback) 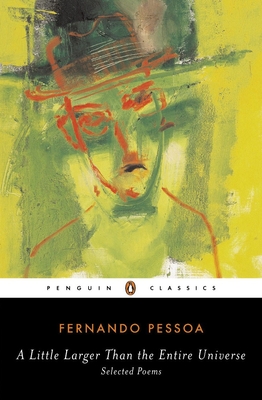 Edited, Translated, and with an Introduction by Richard Zenith, the author of the Pulitzer Prize finalist Pessoa: A Biography

Writing obsessively in French, English, and Portuguese, poet Fernando Pessoa (1888–1935) left a prodigious body of work, much of it credited to three “heteronyms”―Alberto Caeiro, Ricardo Reis, and Alvaro de Campos―alter egos with startlingly different styles, points of view, and biographies. Offering a unique sampling of his most famous voices, this collection features Pessoa’s major, best-known works and several stunning poems that have come to light only in this century, including his long, highly autobiographical swan song. Featuring a rich body of work that has never before been translated into English, this is the finest introduction available to the stunning breadth of Pessoa’s genius.

Fernando Pessoa (1888–1935) was born in Lisbon and brought up in Durban, South Africa. He returned to Lisbon in 1905. A prolific writer, ascribing his work to a variety of personas or heteronyms, Pessoa published little in his lifetime and supported himself by working as a commercial translator. Although acknowledged as an intellectual and a poet, his literary genius went largely unrecognized until after his death.

Richard Zenith (editor, translator, introducer) lives in Lisbon, where he works as a freelance writer, translator, and critic. He was a finalist for the Pulitzer Prize for Pessoa: A Biography. His translations include Galician-Portuguese troubadour poetry; novels by Antonio Lobo Antunes; Pessoa's The Book of Disquiet, which won the Calouste Gulbenkian Translation Prize for Portuguese Translation; Fernando Pessoa and Co.: Selected Poems, which won the PEN Award for Poetry in Translation; and João Cabral de Melo Neto's Education by Stone: Selected Poems, which won the Academy of American Poets’ Harold Morton Landon Translation Award. In 2012, Zenith was awarded Portugal’s Pessoa Prize.

“Pessoa was one of the great, twentieth-century poets, the equal of Yeats, Rilke, Valéry, Lorca, Pasternak, or Hart Crane. Here, at long last, is a copious selection, translated by the gifted poet and scholar Richard Zenith. It is cause for rejoicing.” ―John Ashbery