On the Road (Paperback) 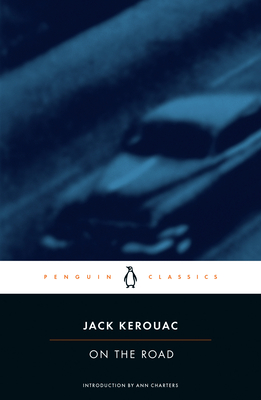 On the Road chronicles Jack Kerouac's years traveling the North American continent with his friend Neal Cassady, "a sideburned hero of the snowy West." As "Sal Paradise" and "Dean Moriarty," the two roam the country in a quest for self-knowledge and experience. Kerouac's love of America, his compassion for humanity, and his sense of language as jazz combine to make On the Road an inspirational work of lasting importance. Kerouac’s classic novel of freedom and longing defined what it meant to be “Beat” and has inspired every generation since its initial publication more than fifty years ago. This Penguin Classics edition contains an introduction by Ann Charters.

Jack Kerouac was born in Lowell, Massachusetts, in 1922, the youngest of three children in a Franco-American family. He attended local Catholic and public schools and won a scholarship to Columbia University in New York City, where he first met Neal Cassady, Allen Ginsberg, and William S. Burroughs. His first novel, The Town and the City, appeared in 1950, but it was On the Road, published in 1957 and memorializing his adventures with Neal Cassady, that epitomized to the world what became known as the “Beat generation” and made Kerouac one of the most best-known writers of his time. Publication of many other books followed, among them The Dharma Bums, The Subterraneans, and Big Sur. Kerouac considered all of his autobiographical fiction to be part of “one vast book,” The Duluoz Legend. He died in St. Petersburg, Florida, in 1969, at the age of forty-seven.

Ann Charters, a Jack Kerouac and Beat Generation scholar, is professor of American Literature emerita at the University of Connecticut in Storrs. in 1966, she worked with Kerouac to compile his bibliography, and was the only biographer who interviewed him about the circumstances in which he wrote his books. She is the author of his first biography, Kerouac, in 1973. She edited his posthumous poetry collection, Scattered Poems. She is also the editor of numerous books on Beat and other literature, including The Portable Beat Reader, The Portable Sixties Reader, Beat Down to Your Soul, The Portable Jack Kerouac Reader, and two volumes of Kerouac’s Selected Letters.

"An authentic work of art . . . the most beautifully executed, the clearest and the most important utterance yet made by the generation Kerouac himself named years ago as 'beat,' and whose principal avatar he is."
--Gilbert Millstein, The New York Times

"On the Road has the kind of drive that blasts through to a large public. . . . What makes the novel really important, what gives it that drive is a genuine new, engaging and exciting prose style. . . . What keeps the book going is the power and beauty of the writing."
--Kenneth Rexroth, San Francisco Chronicle

"One of the finest novels of recent years. . . a highly euphoric and intensely readable story about a group of wandering young hedonists who cross the country in endless search of kicks."
--Leonard Feather, Downbeat