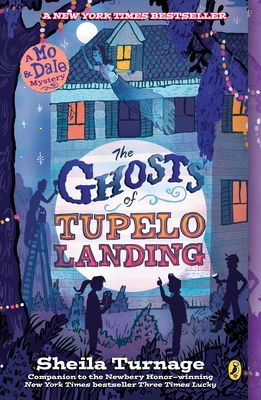 Fans of Three Times Lucky are in for a treat with this companion book, told in the incomparable voice of Miss Mo LoBeau. An intriguing new character joins the regular denizens of Tupelo Landing, NC, for this novel - part mystery, part ghost story, entirely delightful! — Gail King

When Miss Lana winds up the mortified owner of an old inn with an unidentified ghost in the fine print, Mo’s itching to take the case. Plus, a historical ghost might make for some much needed Extra Credit in history. Who’s haunting the old inn? And why? Mo and Dale set out to solve their second big case—only to find the inn might not be the only thing in Tupelo Landing haunted by the past.

A laugh out loud, ghostly, Southern mystery that can be enjoyed by readers visiting Tupelo Landing for the first time, as well as those who are old friends of Mo and Dale.

Look for all the Mo & Dale Mysteries: The Ghosts of Tupelo Landing, The Odds of Getting Even, and The Law of Finders Keepers

Sheila Turnage grew up on a farm in eastern North Carolina. A graduate of East Carolina University, she authored two nonfiction books and one picture book before she started writing about Mo LoBeau and Dale. Three Times Lucky is a Newbery Honor book, a New York Times bestseller, an Edgar Award Finalist, an E. B. White Read-Aloud Honor book, and was included on seven Best Book of the Year lists. The Ghosts of Tupelo Landing, the follow-up to Three Times Lucky, has so far garnered five starred reviews. Today Sheila lives on a farm with her husband, a smart dog, a dozen chickens, and a flock of guineas.

"The perspicacious Mo LoBeau is at it again!. . . humor and action abound."—School Library Journal, starred review

"Just as its predecessor did, this sequel shines thanks to Turnage's deft, lyrical language and engaging characters."—Kirkus, starred review

"Turnage's ability to create convincing characters and her colorful use of language combine to make this a fresh, droll, rewarding trip to Tupelo Landing."—Booklist, starred review

"The budding detective has clearly taken to heart something her foster mother always emphasizes: 'All the world's a stage, sugar, so hop on up there.'"—Publishers Weekly, starred review

"With less real danger here than in the first book, some Scooby Doo twists, and a bona fide ghost, this is sure to please both fans and readers new to Mo, who remains as quotable as she is lovable. . . .we certainly hope there is more to come from the Desperado Detectives."—The Bulletin of the Center for Children's Books, starred review

"What do you get when you combine Because of Winn-Dixie's heart with the mystery and action of Holes?...Mo LoBeau is destined to become a standout character in children's fiction."—Kirkus, starred review

"Here is a writer who has never met a metaphor or simile she couldn't put to good use."—Publishers Weekly, starred review

"The heroine of Sheila Turnage's "Three Times Lucky" is so plucky that young readers may wish she lived next door."—Wall Street Journal

"A literary descendant of Scout Finch of "To Kill a Mockingbird"—Mo LoBeau announces this novel's mystery from behind the counter of the Tupelo Diner: 'There's been a murder and we're out of soup.'"—Newsday