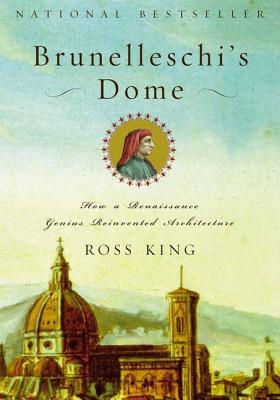 A great story comes in this small package. Technical enough to leave you marveling at Filippo Brunelleschi's engineering feats involved in the building of the dome on Florence's cathedral, vivid enough to transport you into the streets of Renaissance Florence. This year's Longitude...Inspiring!

By all accounts, Filippo Brunelleschi, goldsmith and clockmaker, was an unkempt, cantankerous, and suspicious man-even by the generous standards according to which artists were judged in fifteenth-century Florence. He also designed and erected a dome over the cathedral of Santa Maria del Fiore-a feat of architectural daring that we continue to marvel at today-thus securing himself a place among the most formidable geniuses of the Renaissance. At first denounced as a madman, Brunelleschi literally reinvented the field of architecture amid plagues, wars, and political feuds to raise seventy million pounds of metal, wood, and marble hundreds of feet in the air. Ross King's captivating narrative brings to life the personalities and intrigue surrounding the twenty-eight-year-long construction of the dome, opening a window onto Florentine life during one of history's most fascinating eras.