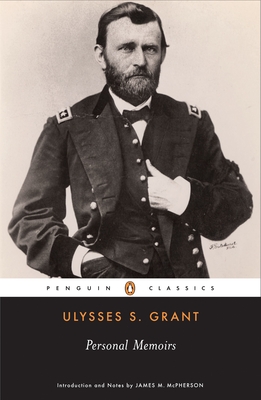 “The foremost military memoir in the English language, written in a clear, supple style . . . a masterpiece.” —Ron Chernow, in Grant

Faced with cancer and financial ruin, Ulysses S. Grant wrote his personal memoirs to secure his family's future—and won himself a unique place in American letters. Acclaimed by writers as diverse as Mark Twain and Gertrude Stein, Grant's memoirs demonstrate the intelligence, intense determination, and laconic modesty that made him the Union's foremost commander. Personal Memoirs is devoted almost entirely to his life as a soldier, tracing the trajectory of his extraordinary career from West Point cadet to general-in-chief of all Union armies. With their directness and clarity, his writings on war are without rival in American literature.

Ulysses S. Grant (1822–1885) was born Hiram Ulysses Grant in Point Pleasant, Ohio, and worked on the family farm until his appointment in 1839 to the U.S. Military Academy at West Point. There, he was erroneously registered as “U. S. Grant”—a change that he would adopt for the rest of his life. He served in the Mexican War (1846­–1848) under Generals Zachary Taylor and Winfield Scott. After the outbreak of the Civil War, Grant was appointed colonel of a militia regiment, and moved up through the ranks of the army, eventually becoming lieutenant general with command of all the armies of the United States and leading the Union army to victory in 1865. From 1869–1877 he served as the eighteenth president of the United States. Encouraged by his friend Mark Twain, Grant began preparing his memoirs in 1884. The Personal Memoirs of U. S. Grant were completed just a few days before his death on July 23, 1885.

James M. McPherson, the George Henry David Professor Emeritus of United States History at Princeton University, is the author of the Pulitzer Prize-winning Battle Cry of Freedom, as well as the award-winning books The Struggle for Equality, For Cause and Comrades: Why Men Fought in the Civil War, and Tried for War: Abraham Lincoln as Commander in Chief, among others. In 2007, he was the first recipient of the Pritzker Military Library Literature Award for lifetime achievement in military history, and in 2009, he was elected a Fellow of the American Academy of Arts and Sciences.

"The best [memoirs] of any general's since Caesar."  —Mark Twain

"A unique expression of the national character . . . [Grant] has conveyed the suspense which was felt by himself and his army and by all who believed in the Union cause. The reader finds himself . . . on edge to know how the Civil War is coming out."   —Edmund Wilson

“Perhaps the most revelatory autobiography of high command to exist in any language. . . . If there is a single contemporary document which explains ‘why the North won the Civil war,’ that abiding conundrum of American historical inquiry, it is the Personal Memoirs of U. S. Grant.” —John Keegan

“Well observed, often humorous, invariably charming, penetrating and lucid . . . On every page, his narrative has the simple directness of the finest English prose, inspired by the King James Bible on which he had been raised. The overall effect is both intimate and majestic.” —The Guardian