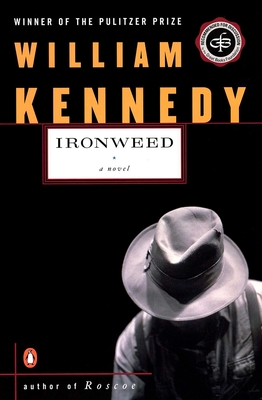 By William Kennedy
$17.00
Click Title for IN STOCK Location

The story of Francis Phelan, a bum in depression-era Albany, by turns profound, funny, startling, and gorgeous, stands with Huckleberry Finn, The Great Gatsby, and The Sound and the Fury in the pantheon of great American literature. — Mike Hare

In this Pulitzer Prize-winning novel, the third in Kennedy’s Albany cycle, Francis Phelan, ex-ballplayer, part-time gravedigger, and full-time bum with the gift of gab, has hit bottom. Years earlier he’d left Albany after he dropped his infant son accidentally, and the boy died.  Now, in 1938, Francis is back in town, roaming the old familiar streets with his hobo pal, Helen, trying to make peace with the ghosts of the past and present.

William Kennedy, author, screenwriter and playwright, was born and raised in Albany, New York. Kennedy brought his native city to literary life in many of his works. The Albany cycle, includes Legs, Billy Phelan's Greatest Game, and the Pulitzer Prize winning Ironweed.The versatile Kennedy wrote the screenplay for Ironweed, the play Grand View, and cowrote the screenplay for the The Cotton Club with Francis Ford Coppola. Kennedy also wrote the nonfiction O Albany! and Riding the Yellow Trolley Car. Some of the other works he is known for include Roscoe and Very Old Bones.

Kennedy is a professor in the English department at the State University of New York at Albany. He is the founding director of the New York State Writers Institute and, in 1993, was elected to the American Academy of Arts and Letters. He has received numerous literary awards, including the Literary Lions Award from the New York Public Library, a National Endowment for the Arts Fellowship, and a Governor’s Arts Award. Kennedy was also named Commander of the Order of Arts and Letters in France and a member of the board of directors of the New York State Council for the Humanities.

“Rich in plot and dramatic tension . . . almost Joycean in its variety of rhetoric . . . the novel goes straight for the throat and the funnybone.”
– The New York Times

“Astonishing . . . Kennedy’s ambitious vision and soaring imaginative powers make this book one of the richest, most startling, and most satisfying novels of recent years.”
– The Philadelphia Inquirer

“A beautifully sorrowful novel.  Kennedy asks us again to confront the mystery of human behavior.  And as he illuminates it, we share in one’s man’s struggle to understand his life.”
– The Washington Post

“Kennedy’s power is such that the reader will follow him almost anywhere, to the edge of tragedy and back again to redemption.”
– The Wall Street Journal