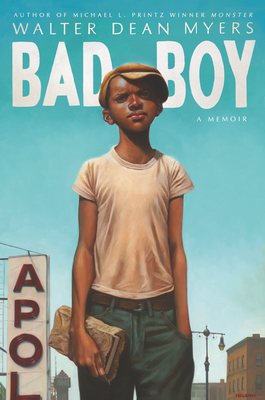 A classic memoir that's gripping, funny, and ultimately unforgettable from the bestselling former National Ambassador of Books for Young People. A strong choice for summer reading—an engaging and powerful autobiographical exploration of growing up a so-called "bad boy" in Harlem in the 1940s.

As a boy, Myers was quick-tempered and physically strong, always ready for a fight. He also read voraciously—he would check out books from the library and carry them home, hidden in brown paper bags in order to avoid other boys' teasing. He aspired to be a writer (and he eventually succeeded).

But as his hope for a successful future diminished, the values he had been taught at home, in school, and in his community seemed worthless, and he turned to the streets and to his books for comfort.

Don’t miss this memoir by New York Times bestselling author Walter Dean Myers, one of the most important voices of our time.

Walter Dean Myers was the New York Times bestselling author of Monster, the winner of the first Michael L. Printz Award; a former National Ambassador for Young People's Literature; and an inaugural NYC Literary Honoree. Myers received every single major award in the field of children's literature. He was the author of two Newbery Honor Books and six Coretta Scott King Awardees. He was the recipient of the Margaret A. Edwards Award for lifetime achievement in writing for young adults, a three-time National Book Award Finalist, as well as the first-ever recipient of the Coretta Scott King-Virginia Hamilton Award for Lifetime Achievement.

“Myers paints a fascinating picture of his childhood growing up in Harlem in the 1940s.” — Publishers Weekly

“Many of the individual scenes have power…and the author’s voice and heart are consistently heard and felt throughout.” — The Horn Book

“A powerful read. Will make the reader laugh out loud & sigh with satisfaction.” — Voice of Youth Advocates (VOYA)

“This memoir joins the ranks of stellar literary autobiographies, such as Fleischman’s Abracadabra Kid and Zindel’s Pigman and Me.” — Bulletin of the Center for Children’s Books