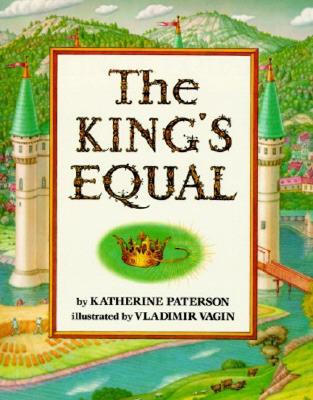 To wear the crown of his father, Prince Raphael must find a queen equal to him in every way, but he too must be her equal. In this modern fairy tale, Paterson weaves a tale of what it truly means to be beautiful, wise and wealthy. Vladimir Vagin's illustrations complement the magic tale with imaginative folk art, with Vagin's Russian heritage evoked in the illustrations. Two great story tellers have created a family classic. Paterson is a Vermont author and Vagin is a Vermont illustrator and author. — Jeanette

A dying king makes his son his heir--on one condition. Vain Prince Raphael must marry a woman who is his equal in beauty, intelligence, and wealth...

Where is this woman?

A search throughout the kingdom proves fruitless. Then the lovely Rosamund appears at the palace, as if by magic, and Raphael is certain he has found his wife. She is intelligent and wealthy, as well as beautiful--certainly his equal, he thinks.

But what does the mysterious Rosamund think?

"Finding a princess who is the 'king's equal' in comeliness, intelligence, and wealth is an order that confounds the wisest, most loyal councilors in this distant realm. Finding a book equal in quality to this one is an even more formidable task. [Newbery medalist] Paterson weaves her story within the structure of familiar fairy tales. . . . Vagin's illustrations are exquisite." —SLJ.

Katherine Paterson is one of the world’s most celebrated and beloved authors. Among her many awards are two Newberys and two National Book Awards, and she was recently named a "Living Legend” by the Library of Congress. She has been published in more than 22 languages in a variety of formats, from picture books to historical novels.

Vladimir Vagin lived in Russia until he moved to the United States in 1990. Mr. Vagin has illustrated several books for children, including Katherine Paterson’s The King’s Equal and Celia and the Sweet, Sweet Water. He lives in Middletown Springs, VT.