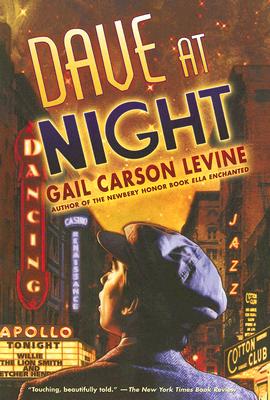 Dave at Night is the story of eleven-year-old Dave Caros, an orphan who is taken to the Hebrew Home for Boys, near Harlem. Dave is dauntless in spite of the possibility of punishment by "Mr. Doom," the abusive superintendent. One night he leaves and is befriended by the grandfather figure, Solly, and a black heiress, Irma Lee. Ms. Levine captures the late 1920s period as background for heroic underdog characters in a fast-moving, believable, and unusual story.

If nobody wants him, that's fine.He'll just take care of himself.

When his father dies, Dave knows nothing will ever be thesame. And then it happens. Dave lands in an orphanage—the cold and strict Hebrew Home for Boys in Harlem—far from the life he knew on the Lower East Side. But he's not so worried. He knows he'll be okay. He always is. If it doesn't work out, he'll just leave, find a better place to stay. But it's not that simple.

Outside the gates of the orphanage, the nighttime streets of Harlem buzz with jazz musicians and swindlers; exclusive parties and mystifying strangers. Inside, another world unfolds, thick with rare friendships and bitter enemies. Perhaps somewhere, among it all, Dave can find a place that feels like home.