Just as I Am Low Price CD (CD-Audio) 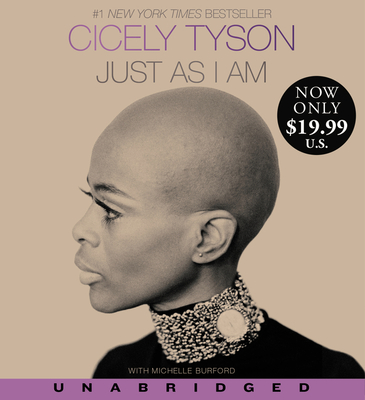 At last, the Academy, Tony, and three-time Emmy Award-winning actor and trailblazer, Cicely Tyson, tells her stunning story, looking back at her six-decade career and life.

Ms. Cicely Tyson is an actress, lecturer, activist, and one of the most respected talents in American theater and film history. From her starring role on Broadway in The Blacks (1961), to the Emmy-nominated 1999 HBO film A Lesson Before Dying, her work has garnered critical and commercial applause for more than sixty years. Her two Emmys for The Autobiography of Miss Jane Pittman made her the first African-American woman to win an Emmy for Best Actress. In 2013, Ms. Tyson won the Tony Award for Best Actress in a Play for her performance as Miss Carrie Watts in The Trip to Bountiful. A capstone achievement came in 2018, when she became the first Black woman to receive an honorary Oscar. The Board of Governors voted unanimously to honor her with the award, which came 45 years after her Academy Award nominated performance in Sounder.

Cecily Tyson, Oscar® nominee, ACE winner, three-time Emmy winner, lecturer, activist and humanitarian, is one of the most respected and honored talents in American theater and film.

VIOLA DAVIS is an internationally acclaimed actress and producer, known for her exceptional performances in television shows like 'How to Get Away with Murder' and movies like 'Fences' and 'The Help.' She is the winner of an Academy Award, an Emmy Award, and two Tony Awards, and in 2021 she won a Screen Actors Guild award for her role in 'Ma Rainey's Black Bottom'. In both 2012 and 2017, Time magazine named her one of the 100 most influential people in the world. Davis is also the founder and CEO of JuVee Productions, an artist driven production company that develops and produces independent film, theater, television, and digital content.