The Happiest Man on Earth: The Beautiful Life of an Auschwitz Survivor (Hardcover) 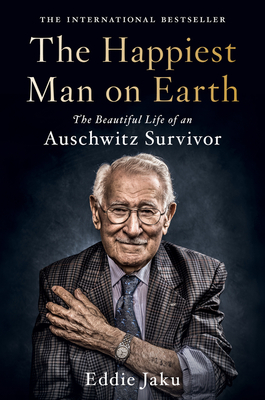 In this uplifting memoir in the vein of The Last Lecture and Man’s Search for Meaning, a Holocaust survivor pays tribute to those who were lost by telling his story, sharing his wisdom, and living his best possible life.

Born in Leipzig, Germany, into a Jewish family, Eddie Jaku was a teenager when his world was turned upside-down. On November 9, 1938, during the terrifying violence of Kristallnacht, the Night of Broken Glass, Eddie was beaten by SS thugs, arrested, and sent to a concentration camp with thousands of other Jews across Germany. Every day of the next seven years of his life, Eddie faced unimaginable horrors in Buchenwald, Auschwitz, and finally on a forced death march during the Third Reich’s final days. The Nazis took everything from Eddie—his family, his friends, and his country. But they did not break his spirit.

Against unbelievable odds, Eddie found the will to survive. Overwhelming grateful, he made a promise: he would smile every day in thanks for the precious gift he was given and to honor the six million Jews murdered by Hitler. Today, at 100 years of age, despite all he suffered, Eddie calls himself the “happiest man on earth.” In his remarkable memoir, this born storyteller shares his wisdom and reflects on how he has led his best possible life, talking warmly and openly about the power of gratitude, tolerance, and kindness. Life can be beautiful if you make it beautiful. With The Happiest Man on Earth, Eddie shows us how.

Filled with his insights on friendship, family, health, ethics, love, and hatred, and the simple beliefs that have shaped him, The Happiest Man on Earth offers timeless lessons for readers of all ages, especially for young people today.

Eddie Jaku OAM was born Abraham Jakubowicz in Germany in 1920. In World War Two, Eddie was imprisoned in Buchenwald and Auschwitz concentration camps. In 1945, he was sent on a 'death march' but escaped. Finally he was rescued by Allied soldiers. In 1950 he moved with family to Australia where he lived for over sixty years. Eddie was married to his wife Flore for 75 years and they had two sons, four grandchildren and five great grandchildren. He died peacefully in October 2021, at the age of 101.

"A beautifully told, poignant story that should become required reading. Thank you, Eddie, for sharing your story of courage, resilience, kindness and  love. Your book is our tonic, our medicine, our hope for living the happiest life we can." — Heather Morris, #1 New York Times Bestselling author of The Tattooist of Auschwitz

Happiest Man on Earth: The Beautiful Life of an Auschwitz Survivor
$10.00
Very Good