Sapiens: A Graphic History: The Birth of Humankind (Vol. 1) (Hardcover) 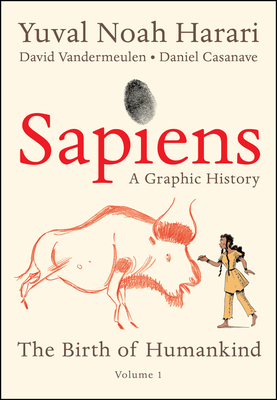 When I first spotted this book on the shelf, I did a double-take. I had absolutely adored Sapiens, Yuval Noah Harari’s all-encompassing history of human development and behavior, but I could not for a second imagine how such a complex and cerebral work of literature would translate to, of all things, a graphic novel. It was almost begrudgingly that I flipped the cover open and began to read. This adaptation is by no means a carbon copy of its ancestor, but it is just as effective as (and in some cases, more than) the original book. Harari himself is the star of the show, drawn as a cheerful and patient guide through history, and in this version he’s accompanied by half a dozen fellow scientists who aid him in his explanation of some of the more specialized subjects. This format lets us travel from the prehistoric savannah to the French Revolution in the span of a page without missing a beat, and makes it easier to digest complicated topics like legal fiction, genetic and cultural adaptation, or social stratification. Sapiens: The Birth of Humankind will be a hit with fans of the original book, history buffs new and old, and anyone else who might, like me, stumble across it by surprise. — Digby Baker-Porazinski

A hardcover edition of the first volume of the graphic adaptation of Yuval Noah Harari's smash #1 New York Times and international bestseller recommended by President Barack Obama and Bill Gates, with gorgeous full-color illustrations and concise, easy to comprehend text for readers of all ages.

One hundred thousand years ago, at least six different species of humans inhabited Earth. Yet today there is only one—homo sapiens. What happened to the others? And what may happen to us?

In this first volume of the full-color illustrated adaptation of his groundbreaking book, renowned historian Yuval Harari tells the story of humankind’s creation and evolution, exploring the ways in which biology and history have defined us and enhanced our understanding of what it means to be “human.” From examining the role evolving humans have played in the global ecosystem to charting the rise of empires, Sapiens challenges us to reconsider accepted beliefs, connect past developments with contemporary concerns, and view specific events within the context of larger ideas.

Featuring 256 pages of full-color illustrations and easy-to-understand text covering the first part of the full-length original edition, this adaptation of the mind-expanding book furthers the ongoing conversation as it introduces Harari’s ideas to a wide new readership.

Prof. Yuval Noah Harari is a historian, philosopher, and the bestselling author of Sapiens: A Brief History of Humankind, Homo Deus: A Brief History of Tomorrow, 21 Lessons for the 21st Century, and Sapiens: A Graphic History. His books have sold over 35 million copies in 65 languages, and he is considered one of the world’s most influential public intellectuals today. The Guardian has credited Sapiens with revolutionizing the non-fiction market and popularizing “brainy books”.

In 2020 Harari joined forces with renowned comics artists David Vandermeulen and Daniel Casanave, to create Sapiens: A Graphic History: a radical adaptation of the original Sapiens into a graphic novel series. This illustrated collection casts Yuval Noah Harari in the role of guide, who takes the reader through the entire history of the human species, accompanied by a range of fictional characters and traveling through time, space and popular culture references.

Born in Haifa, Israel, in 1976, Harari received his PhD from the University of Oxford in 2002, and is currently a lecturer at the Department of History, the Hebrew University of Jerusalem. He originally specialized in world history, medieval history and military history, and his current research focuses on macro-historical questions such as: What is the relationship between history and biology? What is the essential difference between Homo sapiens and other animals? Is there justice in history? Does history have a direction? Did people become happier as history unfolded? What ethical questions do science and technology raise in the 21st century?

"This appealing first volume elucidates often misunderstood basics of human evolution (i.e., that until 50,000 years ago, there used to be at least six species of humans) while also unraveling knotty existential questions about humanity’s role on this planet. Young science enthusiasts and adult philosophers alike will want to pick up this smart, snappy work." — Publishers Weekly

"In a manner that is both playful and provocative, Harari teams with co-creators adept at the graphic format to enliven his academic studies....An informative, breathless sprint through the evolution and consequences of human development." — Kirkus Reviews