Notes on an Execution: A Novel (Hardcover) 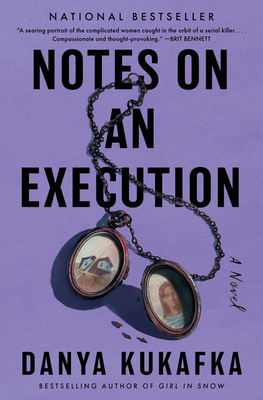 This gripping tale of a serial killer begins at 12 hours before his upcoming execution as he waits on death row. The chapters alternate between his jail cell and the story of his life, starting with his early childhood years, and continuing throughout his adulthood. We discover when, how and why his psychopathic behavior began and developed, as told through the eyes of three prominent women in his life. His mother, his wife, and a female detective weave through the story and lead you to the final hours of his life. In a strangely empathetic way you find yourself trying to decide if you feel sorry for him. But ultimately you feel complete satisfaction with his fate. — Jen Grigsby

HarperAudio US · NOTES ON AN EXECUTION By Danya Kukafka

Ansel Packer's difficult life unfolds as the days and hours dwindle down to his execution. The story is largely told from the perspective of the women whose lives, both personal and professional, were upended and forever damaged by their encounters with him. This novel provides astonishingly perceptive insight into Ansel's tortured soul and it is to the author's great credit that, even knowing the deadly extent of his crimes, she manages to summon up a degree of compassion and pity for him. — Alden Graves

“Notes on an Execution flows like a quiet river coming to a waterfall — lyrical, tense, and quietly explosive. This book is full of compassion for each character, even the killer to be executed. Kukafka has outdone herself with this book.”
— Annie Philbrick, Bank Square Books, Mystic, CT

"A searing portrait of the complicated women caught in the orbit of a serial killer. . . . Compassionate and thought-provoking." –BRIT BENNETT, #1 New York Times bestselling author of The Vanishing Half

In the tradition of Long Bright River and The Mars Room, a gripping and atmospheric work of literary suspense that deconstructs the story of a serial killer on death row, told primarily through the eyes of the women in his life—from the bestselling author of Girl in Snow.

Ansel Packer is scheduled to die in twelve hours. He knows what he’s done, and now awaits execution, the same chilling fate he forced on those girls, years ago. But Ansel doesn’t want to die; he wants to be celebrated, understood.

Through a kaleidoscope of women—a mother, a sister, a homicide detective—we learn the story of Ansel’s life. We meet his mother, Lavender, a seventeen-year-old girl pushed to desperation; Hazel, twin sister to Ansel’s wife, inseparable since birth, forced to watch helplessly as her sister’s relationship threatens to devour them all; and finally, Saffy, the detective hot on his trail, who has devoted herself to bringing bad men to justice but struggles to see her own life clearly. As the clock ticks down, these three women sift through the choices that culminate in tragedy, exploring the rippling fissures that such destruction inevitably leaves in its wake.

Blending breathtaking suspense with astonishing empathy, Notes on an Execution presents a chilling portrait of womanhood as it simultaneously unravels the familiar narrative of the American serial killer, interrogating our system of justice and our cultural obsession with crime stories, asking readers to consider the false promise of looking for meaning in the psyches of violent men.

"Poetic and mesmerizing . . . Powerful, important, intensely human, and filled with a unique examination of tragedy, one where the reader is left with a curious emotion: hope." —USA TODAY

“A profound and staggering experience of empathy that challenges us to confront what it means to be human in our darkest moments. . . . I relished every page of this brilliant and gripping masterpiece."—ASHLEY AUDRAIN, New York Times bestselling author of The Push

Danya Kukafka is the internationally bestselling author of Girl in Snow. She is a graduate of New York University’s Gallatin School of Individualized Study. She works as a literary agent.

"This novel is defiantly populated with living women . . . Kukafka evokes the disarming fog of grief, its wild illogic, its transformative power. . . . Notes on an Execution is nuanced, ambitious and compelling. . . . The seduction of the serial killer narrative is difficult to shake, for reader and author alike. We keep watching, and we keep turning the pages. In our fascination, we’re all implicated." — New York Times Book Review (Editors' Choice)

"Poetic and mesmerizing . . . Notes on an Execution is a career-defining novel—powerful, important, intensely human, and filled with a unique examination of tragedy, one where the reader is left with a curious emotion: hope." — USA Today

“At once blistering with righteous anger and radical empathy, Notes on an Execution is destined to become a contemporary classic.” — Esquire, The Most Anticipated Books of Winter 2022

"There's no question whodunit here: The killer is already in prison when the book begins. The story Notes aims to tell is how he got there. . . . But [Kukafka] also takes care to give Packer's victims what they never got in life: a voice." — Entertainment Weekly, 8 Books to Keep You Page-Turning All Season Long

"Deeply feeling, super raw . . . It's really creative. I never really had read anything like it." — Jenna Bush Hager, Read With Jenna

"Danya Kukafka’s Notes on an Execution is an intense thriller that reads like a mash-up of Law & Order and a college psych class. The fictional story of Ansel Packer, a serial killer on death row, is given a brilliant twist by focusing on the women he affected, ultimately asking why we’re drawn to crime stories about violent men. Cleverly constructed and smart, this is the kind of book you finish with a big exhale." — Real Simple

"A searing portrait of the complicated women caught in the orbit of a serial killer. Notes on an Execution examines a culture that romanticizes men who kill while also exploring the lives of the overlooked women altered by this violence. Compassionate and thought-provoking." — Brit Bennett, #1 New York Times bestselling author of The Vanishing Half

"Spellbinding and beautifully written. Danya Kukafka’s Notes on an Execution is an irresistible, unbearably tense thriller; a poignant, deeply compassionate tale of resilience; and a vital intervention in the way we talk about violent crime, its endless reverberations and foremost its survivors." — Megan Abbott, New York Times bestselling author of The Turnout

"Reading Danya Kukafka’s Notes on an Execution is a profound and staggering experience of empathy that challenges us to confront what it means to be human in our darkest moments. The stories of these richly drawn characters are layered like nesting dolls, each one revealing more about how we love and how we survive. Kukafka’s prose, alive and poetic, is unforgettable. I relished every page of this brilliant and gripping masterpiece." — Ashley Audrain, New York Times bestselling author of The Push

“Notes on an Execution is seriously important crime fiction that trains the lens on a serial killer's victims rather than on the criminal himself and shows how the legacy of violence endures for decades, leaving a tidal wave of collateral damage in its wake. Kukakfa's story is unflinching and unromantic yet wrenching and devastating in equal measure. Never falling into the easy trap of sensationalism, Notes on an Execution pushes women to the forefront of a narrative that has too often overlooked them and all they suffer.” — Ivy Pochoda, award-winning author of These Women and Wonder Valley

“In Notes on an Execution, Danya Kukafka gives us something wrenchingly original, a rare and unsettling reading experience that challenges us to peel back what we believe about the criminal justice system, good and evil, and what human beings are capable of, both in darkness and in light. A moving tour de force of empathy and insight. I loved this book.”
— Paula McLain, New York Times bestselling author of When the Stars Go Dark and The Paris Wife

"This striking, deeply compassionate novel is for anyone who’s ever been fascinated by serial killer stories — and also wondered if there ought to be more to them. Here, we see all the women whose lives have been affected by one man on the eve of his execution, from his mother to the detective who eventually catches him. Kukafka’s novel raises difficult questions about the narratives we create around charismatic men, and what forgiveness looks like in the face of terrible wrongs." — Grace D. Li, Washington Post

"Puts the reader in the shoes of a serial killer . . . to strip some mystique from the serial-killer mythology." — Rolling Stone

“An empathetic and gripping story about a serial killer on death row primarily told from the perspectives of the women in his life as the clock ticks to his execution.” — USA Today, 20 Winter Books We Can't Wait to Read

"This beautifully written book does overtime as a suspense-driven mediation on the true crime industry.” — Marie Claire, The Most Eagerly Anticipated Fiction by Women in 2022

"A chilling, surprisingly tender tale of how each tragedy ripples through many lives." — Good Housekeeping, The 15 Best and Most-Anticipated Books of 2022

“Masterly…Chilling and unexpected.” — Oprah Daily, The 50 Most Anticipated Books of 2022

“An inventive approach to the familiar serial killer narrative . . . a new kind of literary suspense novel. . . . Recommended for fans of Long Bright River and The Mars Room, Notes on an Execution examines our culture’s ghoulish obsession with crime stories about (invariably male) serial killers.” — Goodreads, Readers' Most Anticipated Books of January

"This distinctive take turns the overdone serial killer trope on its head, making it more palatable, more intelligent and more emotional. Kukafka portrays a sinister man through the perspectives of the women who knew and loved him, with subtle but shattering truths peppered throughout." — Newsweek, 22 Books to Look Forward to in 2022

"Kukafka crafts a disturbingly remorseless killer in Packer but infuses the events that draw readers to his final moments with raw empathy and lingering questions about human evil and the destruction left in its wake."
— Booklist (starred review)

"Unshakable, deeply compassionate . . . Kukafka wrings tremendous suspense out of a story that isn’t a whodunit or even strictly a why-dunit, suspense born out of a desire to see these women transcend the identities consigned to them. . . . A contemporary masterpiece that sits alongside The Executioner’s Song and Victim: The Other Side of Murder in the library of crime literature." — Library Journal (starred review)

"This masterly thriller from Kukafka . . . skillfully uses the second-person present tense to heighten the drama, and toward the end she makes devastatingly clear the toll taken by Packer’s killings. Megan Abbott fans will be pleased." — Publishers Weekly (starred review)

“Bewitching . . . In [Kukafka's] capable hands, villainy turns out to be everywhere and nowhere, a DNA that could be found under the fingernails of everybody’s hands.” — Marisha Pessl,  New York Times Book Review (Editor's Choice), on Girl in Snow