Stanley the Dog: The First Day of School (Hardcover) 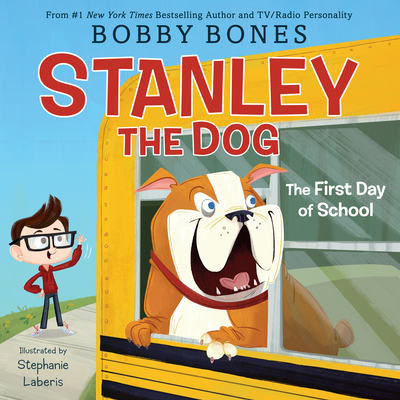 From the award-winning radio and TV personality and beloved two-time New York Times bestselling author Bobby Bones, Stanley the Dog: The First Day of School is a hilarious and heartfelt new picture book about a bulldog pup named Stanley and his adventures on the first day of school.

Today is Stanley’s first day of school—and he really doesn’t want to go. Stanley would rather dawdle in bed and dither over which collar to wear than get on the school bus. With his stomach turning into tighter knots by the minute, Stanley’s worried whether a bulldog like him will ever fit in with the other pups at school.

Illustrated with hilariously loving detail by Stephanie Laberis and inspired by Bobby Bones’s own real-life bulldog puppy, Stanley the Dog: The First Day of School will remind every reader about the challenges of trying new things and the value of staying true to yourself.

Inducted into the National Radio Hall of Fame as the youngest honoree ever, Bobby Bones has been dubbed “the most powerful man in country music” by Forbes. His nationally syndicated radio show, The Bobby Bones Show, reaches millions of listeners weekly on more than one hundred stations and recently garnered its third Academy of Country Music Award for National On-Air Personality of the Year, also earning a 2017 Country Music Association Award for National Broadcast Personality of the Year. When he’s not on the air, Bones is performing stand-up comedy for sold-out audiences, sitting down with country’s biggest stars for his own podcast, The BobbyCast, or hitting the road with his comedy band, Bobby Bones and The Raging Idiots. Additionally, he appeared on ABC’s American Idol as the mentor to the Top 24 contestants. His memoir, Bare Bones, landed at #1 on the New York Times, USA Today, and Wall Street Journal bestseller lists.

Stephanie Laberis resides in Northern California, channeling her love for animals into her illustrations and animated characters. She divides her time between illustrating picture books and designing characters for animated TV shows and films. When she’s not creating art, she can be found volunteering at her local wildlife hospital or lavishing attention onto her feline companions.

"This is an accessible story that will help young children ­transition to the expectations of school, especially when they are feeling trepidation themselves." — School Library Journal