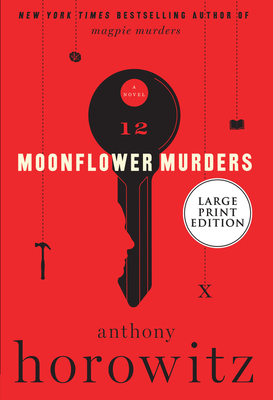 Horowitz as ever is witty and wily; the master of the perfect murder mystery; the heir apparent to Agatha Christie. In Moonflower Murders Susan has been lured back to windswept England from her not-so-idyllic retreat on Crete (where we left her in Magpie Murders). Hired to solve the murder(s) at the Moonflower Hotel by finding clues within a book she edited for the irascible, troublesome and very dead Alan Conway. It is always in the details of character and events that Horowitz (or is it Conway?) shines a dark, sly gleeful light on human nature.

Retired publisher Susan Ryeland is living the good life. She is running a small hotel on a Greek island with her long-term boyfriend Andreas. It should be everything she's always wanted. But is it? She's exhausted with the responsibilities of making everything work on an island where nothing ever does, and truth be told she's beginning to miss London.

And then the Trehearnes come to stay. The strange and mysterious story they tell, about an unfortunate murder that took place on the same day and in the same hotel in which their daughter was married—a picturesque inn on the Suffolk coast named Farlingaye Hall—fascinates Susan and piques her editor’s instincts.

One of her former writers, the late Alan Conway, author of the fictional Magpie Murders, knew the murder victim—an advertising executive named Frank Parris—and once visited Farlingaye Hall. Conway based the third book in his detective series, Atticus Pund Takes the Cake, on that very crime.

The Trehearne’s, daughter, Cecily, read Conway’s mystery and believed the book proves that the man convicted of Parris’s murder—a Romanian immigrant who was the hotel’s handyman—is innocent. When the Trehearnes reveal that Cecily is now missing, Susan knows that she must return to England and find out what really happened.

Brilliantly clever, relentlessly suspenseful, full of twists that will keep readers guessing with each revelation and clue, Moonflower Murders is a deviously dark take on vintage English crime fiction from one of its greatest masterminds, Anthony Horowitz.

ANTHONY HOROWITZ is the author of the US bestselling Magpie Murders and The Word is Murder, and one of the most prolific and successful writers in the English language; he may have committed more (fictional) murders than any other living author. His novel Trigger Mortis features original material from Ian Fleming. His most recent Sherlock Holmes novel, Moriarty, is a reader favorite; and his bestselling Alex Rider series for young adults has sold more than 19 million copies worldwide. As a TV screenwriter, he created both Midsomer Murders and the BAFTA-winning Foyle’s War on PBS. Horowitz regularly contributes to a wide variety of national newspapers and magazines, and in January 2014 was awarded an OBE.

“Moonflower Murders showcases Horowitz’s full battalion of strengths: the whiplash plotting, the leather-smooth prose, the bold energy… and above all, the bright spark of joy that ignites the best fiction—the joy of a storyteller finding brave new ways to dazzle his audience. Sophisticated, literate novels aren’t supposed to be so much fun.”
— A. J. Finn, author of The Woman in the Window