Out of the Blue (Hardcover) 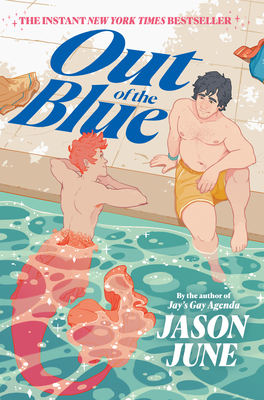 From Jason June, author of the breakout teen debut novel Jay’s Gay Agenda, comes Out of the Blue, a stand-alone dual POV queer rom-com that asks if love is enough to change everything you’ve grown up believing. Perfect for fans of Cemetery Boys by Aiden Thomas and Deep Blue by Jennifer Donnelly.

Crest is not excited to be on their Journey: the month-long sojourn on land all teen merfolk must undergo. The rules are simple: Help a human within one moon cycle and return to Pacifica to become an Elder—or fail and remain stuck on land forever. Crest is eager to get their Journey over and done with. Humans are disgusting. They’ve polluted the planet so much that there’s a floating island of trash that’s literally the size of a country.

In Los Angeles with a human body and a new name, Crest meets Sean, a human lifeguard whose boyfriend has recently dumped him. Crest agrees to help Sean make his ex jealous and win him back. But as the two spend more time together, and Crest’s perspective on humans begins to change, they’ll soon be torn between two worlds. And fake dating just might lead to real feelings . . .

This sophomore novel from Jason June dives into the many definitions of the word home and shows how love can help us find the truest versions of ourselves.

Jason June has planned to be a merperson ever since he first saw The Little Mermaid and strongly identified with King Triton’s daughters. While he waits for his fin to appear, Jason June is a New York Times bestselling author who writes young adult works full of queer joy and love and lust and magic. He is the author of Jay’s Gay Agenda, and can be found on social media @heyjasonjune, and on his website at heyjasonjune.com.

“OUT OF THE BLUE is a hilarious and heart-warming modern update of The Little Mermaid. Splashy, voicey, and prescient, this fish-out-of-water tale (pun intended) is the perfect rom-com to have in your beach bag this summer.”
— Sarah Henning, author of the SEA WITCH duology

Out of the Blue is a sweet, sparkly story that'll make you smile so big your cheeks hurt! — Elise Bryant, author of Happily Ever Afters and One True Loves

Jason June’s fast-paced sophomore novel will appeal to genre fans who didn’t fully understand Ariel’s decision to become human in The Little Mermaid. The world building around merfolk gender identity is both beautiful and deeply necessary for young readers. Fans of Jay’s Gay Agenda (2021) will connect with this sex-positive LGBTQIA+ merfolk story that is a delightfully fun summer read. — Booklist

Merperson Crest begrudgingly embarks on a rite of passage in June’s (Jay’s Gay Agenda) optimistic take on The Little Mermaid, a romance packed with subplots and classic rom-com tropes. June hilariously highlights the often messy realism of interpersonal relationships, and uses that realistic grounding to build toward a true-to-life—rather than picture-perfect—conclusion. — Publishers Weekly

Readers who are drawn to the whimsical premise will stay for its emotional truthfulness about the earth-shattering intensity of first, if not forever, love. — Bulletin of the Center for Children’s Books